‘I can’t really put my finger on it. I go out there and try my best every single day’ 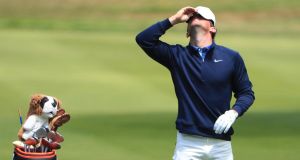 Rory McIlroy during the third round of the 2020 PGA Championship at TPC Harding Park. Photograph: Getty Images

Rory McIlroy is struggling to put a finger on his latest major disappointment, after he failed to mount a challenge at the US PGA Championship over the weekend.

McIlroy’s final round of 68 was his best of the week to finish two under par, 11 shots off Collin Morikawa who now joins the Irishman, Jack Nicklaus and Tiger Woods as the only players since World War Two to win the PGA Championship at age 23 or younger.

McIlroy’s last major win came in 2014, and his disappointing form since golf’s restart has seen him drop from number one to three in the world rankings. He has now gone six tournaments without a top 10 finish.

“I don’t know. Maybe I’m just not as good as I used to be,” he told reporters after his round on Sunday. “I can’t really put my finger on it. I go out there and try my best every single day. Some days I play better than others. You’ve just got to keep going and keep persisting and see if you can do better the next time.

“I feel like the golf that I’ve played in the majors has been sort of similar to the golf I’ve played outside of them, and I’ve won some big events and played well and had a good season last season. This has been one of the tougher tests that we’ve faced since coming back. The Memorial a few weeks ago was really tough, and then it’s been quite challenging this week, with penal rough.

“I gauged these two events as sort of the barometer as to where my game was, and I’m going to pretty much finish in the same spot, around 30th. I haven’t really deviated much from par the last few weeks. I’ve made a lot of birdies, but I’ve made a lot of bogeys, and that’s sort of been the story of my golf since coming back.

“There’s been enough good stuff in there, I’m just making a few too many mistakes and I need to just try to clean that up going forward and get ready for the next few events. I think most guys will probably have six events left to the end of the year, so that’s what I’ll have, I think.”