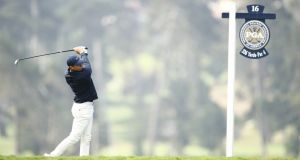 Rory McIlroy in action during the first round of the 2020 PGA Championship at TPC Harding Park in San Francisco, California. Photograph: Ezra Shaw/Getty Images

No one has to tell Rory McIlroy that it’s been six years since he last claimed a Major title but it looked like any chance of ending that wait would be over before it started on Thursday morning at Harding Park before the 2012 and 2014 USPGA winner found some form to keep himself in the hunt.

After a shaky start in this rescheduled US PGA Championship, McIlroy battled back to sign for a level par opening round of 70 to sit five shots leaders Brendon Todd and Jason Day – who rekindled some of the form that saw him lift the Wanamaker Trophy in 2015 to knock it around in 65 shots.

Last year’s British Open champion, Shane Lowry, opened with a two under par round of 68 to sit three off the lead while Graeme McDowell struggled to a 72.

Tiger Woods only has to cast his mind back 16 months to remember when he won his 15th Major title at the 2019 US Masters and, playing alongside McIlroy, the four-time US PGA champion also remains very much in with a chance of moving to within two of Jack Nicklaus’s historic Major record.

For Woods it was a round of 68 to sit at two under par, a position he will be quite satisfied with after playing just four competitive rounds of golf since the Farmers Insurance Open at the end of January.

“Yeah I was [satisfied],” said Woods afterwards. “I figured we were going to get the more favourable conditions today, the wind is supposed to pick up which it is now. The golf course is going to get more difficult and some of these pins were a little more on the difficult side but overall this golf course is all about hitting fairways.”

With the cool northern California temperatures and the heavy marine layer which sits in the Bay Area, this Par 70 layout is one that plays a lot longer than the 7,251 yards printed on the card and it should suit McIlroy’s game.

With a birdie at the Par 5 10th – his first – the four-time Major winner got off to exactly the start he would have wanted on a chilly morning when woolly hats and snoods were the order of the day.

However, McIlroy’s chances looked like they were quickly unravelling when a seven foot par putt slipped past on the 12th before a three-putt on the 13th and a penalty drop on the 14th suddenly left the 31-year-old at two over par through five holes and reeling from three bogeys on the spin.

In contrast, Woods set out his stall early with birdies at the 10th – after a flop shot into orbit from the right hand side of the green – and the 13th.

At last year’s US Open, which took place two hours down the coast at Pebble Beach, Woods spoke about how chilly weather does his body no favours, in particular his fused back.

On that occasion he said he “feels every shot” in colder temperatures and, after his fast start, it looked like that may have been the case when a few wayward drives into the thick lush rough led to bogeys at the 14th and the second hole, his 11th, to see him slip back to level par.

At the same time McIlroy was going in the opposite direction thanks to four threes on the spin from the 16th to the first – three of them birdies – to claw his way back to one under.

However, the tables would turn once again as the morning’s marquee group moved closer to the end of their round when Woods birdied the Par 5 fourth, the Par 4 fifth and the Par 4 seventh to reach three under and get within two of Day.

A bogey would follow at the Par 3 eighth after he failed to follow up a magnificent bunker shot with the par putt to match but a closing four was enough for a round of 68, helped by a new putter Woods has in the bag after switching out the model with which he won 14 of his 15 Majors.

“I’ve been messing around with it for the best part of a year,” he said after his round. “It’s a little bit longer than my original one which makes it a bit easier on my back so I can spend more time practicing. That’s the reason some of the senior tour players don’t use the same length putters, they move on because it’s a little bit harder to bend over. I putt with my sand wedge all the time and it feels more like my sand wedge.”

McIlroy, after getting to one under through 10, failed to find another birdie on his way in with a bogey at the sixth coming as his only deviation from pars, leaving him to sign for a round of 70, five behind Day.

“Condition-wise, the wind wasn’t up and it was a little warmer, so that was nice. I felt like the course was there for the taking. Obviously Jason Day shot five under. There’s been a few four unders,” said McIlroy.

“The pins were tucked a little bit. The greens are getting a touch firmer. A lot of wind directions. For example, there’s a few holes where the wind was – or the pin was on the right side of the green and the wind blowing right-to-left, so it’s hard to get yourself to get close to those. You’re sort of hitting to the middle of the greens a lot.

“It was there for the taking today. I mean, I feel like I definitely could have been a few shots lower, but you know, I sort of grinded it out and with how I hit it on the back nine, even par actually wasn’t too bad.”

The final member of the morning’s big three-ball, Justin Thomas, birdied the last to salvage a one over par round of 71.

For Day, who has found some form recently with three top -10s in his last three starts after slipping out of the world’s top 50 in June, a blemish-free card which included five birdies at the first, fourth, ninth, 10th and 17th left him looking down on the rest of the field alongside Todd.

The American has already won twice on tour this year and led going into the final round at last week’s WGC-FedEx St Jude Invitational only to fall away with a closing 74.

As the winds stiffened in the afternoon on Thursday, Todd racked up seven birdies in his opening round, negated only slightly by bogeys at the 14th and 18th to sign for a round of 65.

Tucked in just behind the leaders is a nine-man tie for second including defending champion Brooks Koepka who is looking to make it three US PGA titles in a row. Playing alonsgside Lowry, Koepka ominously set down a marker early with a round of 66 which included six birdies while he is joined at that mark by the likes of Justin Rose, Xander Schauffele and Martin Kaymer.

Bryson DeChambeau opened with a round of 68 to sit at two under while Jon Rahm is alongside McIlroy at level par after a 70.