Another Major slips away as Rory McIlroy ponders six-year drought

After failing to shine at US PGA, McIlroy questioned whether he’s as good as he was 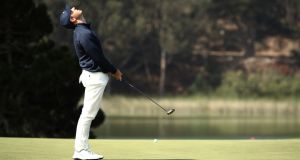 Rory McIlroy reacts to a missed putt on the 17th hole during the first round of the 2020 PGA Championship at TPC Harding Park in San Francisco, California. Photo: Ezra Shaw/Getty Images

One of the television images beamed from San Francisco as the US PGA Championship’s final round at Harding Park unfolded featured Rory McIlroy managing a laugh with caddie Harry Diamond as yet another shot went where it wasn’t intended to go. The in-team joke however seemed misplaced, even if probably borne more out of frustration rather than any true laughing matter; for, by then, McIlroy’s role in the drama didn’t even amount to that of a bit character. For a long time, over days in fact, he was far removed from the real storyline.

As Collin Morikawa revealed himself as the latest in a lineup of young guns to showcase the X-Factor in adding his name to the majestic Wanamaker Trophy, McIlroy – so often the poster boy – was left to look deep inside as another Major came and went. It extended his drought since his last Major win to exactly six years since that August evening triumph in semi-darkness in the US PGA at Valhalla back in 2014.

Not that the intermittent period has been unprofitable. In fact, the Northern Irishman has won 12 times globally since his last Major success – including two WGCs, two Tour Championships on the PGA Tour (and also claiming the FedEx Cup twice, resulting in a $10 million bonus in 2016 and a $15 million bonus last year) and an Irish Open – while also holding the world number one ranking on four different occasions in that time.

The point is, none of that considerable success featured the gold standard judgment barometer: that of a Major. “I think Rory has an opportunity to win 15 or 20 Majors or whatever he wants to do if he keeps playing. I love his swing,” Jack Nicklaus observed following McIlroy’s PGA victory in 2014. At the time, the statement didn’t at all sound preposterous. Now? Such expectations have dipped hugely. The wait for that career number to move on from four has grown longer than anyone could have envisaged.

The biggest disappointment from the latest unfilled box at the US PGA is not that McIlroy didn’t manage to win at Harding Park but rather than he was never really a factor, as he finished in tied-33rd and his work was long done before Morikawa’s late-round magic enabled him to put a gap between himself and the many other pretenders to the crown.

McIlroy has now played in 20 Majors since the 2014 US PGA without adding to his career total. In the post-round flash interview at Harding Park, he was asked why his lean spell in the championships that mean most had extended so long. “Maybe I’m just not as good as I used to be. I don’t know,” he replied, before expanding: “I really don’t know. I feel like the golf that I’ve played in the Majors has been sort of similar to the golf I’ve played outside of them, and I’ve won some big events and played well and had a good season last year. I can’t really put my finger on it. I go out there and try my best every single day. Some days I play better than others, just got to keep going and keep persisting and see if you can do better the next time.”

That next time – for the Majors -– will come around soon enough, with the US Open penciled into the schedule for Winged Foot in New York on September 17th-20th. Before that, McIlroy’s mind will be focused on the defence of his FedEx Cup title, with the Northern Trust, BMW Championship and the Tour Championship comprising the three events of that playoff series. Further down the track, the US Masters (and that perennial bid to complete the career Grand Slam) will take place in November.

By the time McIlroy resumes tournament play at the Northern Trust at TPC Boston in a fortnight’s time, he will need to have found a way to fuel his own energy, with the tournament again being played behind-closed-doors. Yet, there was another revealing insight in his post-round comments after the US PGA when he admitted to being “happy to be playing golf and grateful that we’re still able to play out here. I haven’t played as well as I’ve wanted to, but it beats being sat on the couch at home, so I’ll take it.”

Perhaps such comments demonstrate awareness that he – and his tour colleagues – have it easier than most in the midst of this global pandemic, and of how it has affected people’s lives. Others, though, have managed to create their own noise since the PGA Tour’s resumption.

That McIlroy, who recorded four straight top-5 finishes before the tour stopped, has not yet managed even a top-10 in six tournaments since the resumption would indicate that, just now, he is not as good as he used to be.

The hope is that the old adage of “form is temporary, class is permanent” will ultimately prove true for McIlroy.