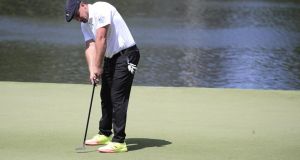 Since the PGA Tour returned bulky Bryson DeChambeau has never been far from the headlines with his huge weight gain and his bludgeon-the-golf-course-to-death tactics proving a big draw. On paper it’s fair to say it’s been pretty successful so far with the American racking up three top-10s and a win in his first four events.

However, his last two tournaments have seen him miss the cut at the Memorial and finish in a tie for 30th after Sunday’s final round at the WGC-Fed Ex St Jude Invitational. And not only has his form dipped but the spotlight has been put on some of his conduct on the course, not least some bizarre incidents involving rules officials.

At Memorial it was a 10 at the 15th on Friday, which included a drive into the penalty area and two balls out of bounds, the second of which caused him to dispute whether his ball was actually outside the boundary of the course (it clearly was), call in a second rules official and then storm off when he was given the same ruling.

And on Thursday just gone it was a similar story, albeit probably even more bizarre, when he looked for a free drop on the seventh hole – where his ball was lying against two twigs – because he claimed to see one or two fire ants around and therefore deemed it a dangerous situation. Unfortunately for DeChambeau, the rules official was having none of it and 10 minutes later the American was chalking up a double bogey six.

Rules disputes happen all the time in professional golf but, for DeChambeau, they’re now a regular occurrence and, what’s more, he had been four under par and in the lead prior to Thursday’s incident which occurred at his 16th hole of the day.

The 26-year-old undoubtedly has the talent and the firepower to win multiple Major championships and the anodyne scene that is professional golf could certainly do with a villain of sorts but there’s no doubting that DeChambeau’s on course attitude where he seems perennially frustrated and stressed does him no favours - as has been exhibited in his last two starts.

This week’s US PGA at Harding Park should offer him an excellent chance of winning a first Major given that the course will play quite long and is a set up that rewards big-hitting but, if anything, it could be his own temperament that stands in his way.

Last month, when he had a run-in with a cameraman at the Rocket Mortgage Classic, he said afterwards that players should not be filmed at all times in order to protect their “brand”.

Well, for a player seemingly so concerned with such matters, he hasn’t done himself or his brand many favours in the last few weeks.

It’s not every day a player has to hop into a boat to hit a shot on the golf course but that’s exactly what happened on Sunday at the Hero Open in Birmingham.

Coming down the 17th hole at the Forest of Arden, Sweden’s Joel Sjoholm was struggling on the back nine after making bogeys at the 10th, 13th and 14th to see any hopes of challenging for the title slipping from his grasp. However, things were about to take a turn when his second shot to the Par 5 sailed left and landed on a tiny island in the lake that guards the front of the green.

Luckily for Sjoholm, there was a small boat and a rope pulley system on the water which allowed him to take four clubs from his caddy, sail over to Henderson’s Island, remove some sponsor’s billboards and chop his third shot over the water and across the green.

He eventually wound up with a bogey six but will be grateful that he simply got out without falling in – something that looked a distinct possibility on a few occasions when the boat started to rock.

There aren’t many golf courses that Tiger Woods didn’t enjoy success on but Firestone Country Club in Akron, Ohio is undoubtedly one of his favourites.

Initially called the NEC Invitational before changing to the Bridgestone Invitational and now the FedEx-St Jude Invitational, the trophy has Woods’ name stamped on it no fewer than eight times.

In 2013 – a season in which he won five times and returned to world number one for the first time since 2010 – Woods was still battling back from injuries and personal scandal but the welcoming sight of Firestone rarely failed to bring out the best in him.

And indeed, that week in 2013, it was very close to his best. After an opening 66 on Thursday, Woods effectively put the tournament to bed as early as Friday evening with a stunning round of 61 to reach 13 under and lead by seven shots.

From there the rest of the field, as they were so used to when up against Woods, were playing for second place. A 68 on Saturday kept Woods seven shots ahead of the pack and meant Sunday was no more than a procession to victory with his worst round of the week, a level par 70, sealing an eight-shot victory over Keegan Bradley and Henrik Stenson and his 18th World Golf Championship – 12 more than anyone else.

“There’s an ant! Nah, just kidding.” – Brooks Koepka – who is certainly not shy of speaking his mind – took the chance to have a dig at Bryson DeChambeau on Friday when his ball ended up in the same mystery ants’ lair on the left hand side of the seventh. It’s fair to say Koepka doesn’t seem to have much time for DeChambeau and the PGA of America – who run this week’s US PGA – could do worse for their TV ratings by pairing the two players together for the first two rounds. Something the PGA Tour have steadfastly avoided doing.

1: That’s the world ranking of the player Jim ‘Bones’ MacKay now caddies for - a first in the career of the veteran caddy. MacKay is filling in on Justin Thomas’s bag for two weeks after parting company with Phil Mickelson three years ago. The pair spent 25 years together but, due to a certain Tiger Woods, never managed to get to world number one.

What’s in the bag?