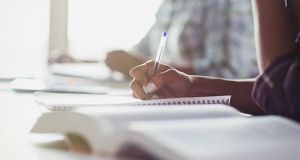 Education experts have warned that Brexit could lead to increases in CAO points over the coming years if thousands of Irish students who study in the UK opt to remain at home. Photograph: Getty Images

There has been a sharp increase in the number of European Union students applying for third-level courses through the CAO system, which experts say is linked to uncertainty over Brexit.

The numbers come as tens of thousands of students prepare to receive their Leaving Cert results on Wednesday.

The points requirements for individual higher education courses will be released next Monday by the CAO (Central Applications System).

In all, 80,766 individuals have applied for college courses this year, on a par with last year’s record number of applicants.

Just over half of these applicants – 47,656 – sat the Leaving Cert this year. The remainder include mature students or those who sat their exams in previous years.

Latest CAO application figures show there has been a 17 per cent increase in the number of EU students seeking to study in Ireland, up from about 1,600 last year to more than 1,900 this year.

There has also been a 9 per cent increase in non-EU students applying for undergraduate courses, up from 584 to 639.

Experts say the trend is linked to uncertainty over Brexit and college fees as growing number of European students consider Ireland as an alternative destination to the UK.

The same uncertainty appears to be behind a drop in the number of UK students seeking to study in the Republic.

Similarly, latest figures show the number of students in Ireland applying to study in the UK’s Ucas system has dropped by almost 20 per cent since the Brexit vote, down from 4,750 students last year to 3,900 this year.

Currently any student in the EU can move to study in another country in the European Union and pay the same fees as they would in their home country.

If no agreement is put in place between the EU and the UK, British and Irish students could be faced with paying non-EU student fees when moving to study in Ireland or the UK.

Both Ireland and Britain have agreed that any student who travels between the countries to study this September will pay the current EU fee rates for the duration of their degree.

However, the Department of Education has said it cannot enter into separate bilateral negotiations with the UK or Northern Irish governments to arrange a specific deal for Irish and British students, and the issue will have to be agreed on an EU level with all 28 states involved.

Department officials stated in records released under the Freedom of Information Act that there is “concern” over potentially losing the current level of student mobility between Ireland, Northern Ireland and the UK.

Education experts have warned that Brexit could lead to increases in CAO points over the coming years if thousands of Irish students who study in the UK opt to remain at home.

Dublin City University president Brian MacCraith said if Irish students were forced to pay much higher international fees as a result of Brexit it is likely to result in sharp increases in application numbers to Irish universities.

“If there is no increase in capacity this will further increase competition for places in Irish universities, with potential increases in CAO points in specific programmes, and displacement of some student who may otherwise have obtained entry places,” Mr MacCraith told an Oireachtas committee earlier this year.