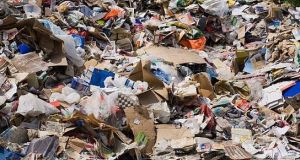 In recent days representatives of the waste recycling and paper industries in the UK have described the Chinese move as “draconian”. Photograph: Getty Images

China has confirmed it is to stop taking many types of recycling material by the end of the year, posing a major difficulty for Ireland and other EU countries.

The Chinese government recently notified the World Trade Organisation it intends to ban the import of “all scrap plastics and unsorted paper” by the end of the year. It is a response to the scale of recyclable waste that is often dirty, poorly sorted or contaminated.

Earlier this year Irish containers of paper enroute to China were intercepted in the Netherlands and found to be contaminated. The entire shipment was returned to Ireland, with estimated costs in terms of shipping, lost revenue, landfill charges and taxes in excess of €1 million.

The latest move will hit Europe’s recycling industry very hard – 87 per cent of its plastic waste ends up in China.

And the abrupt ending of contracts has caused alarm, especially in the UK where in recent days representatives of the waste recycling and paper industries described the move as “draconian”, and asked the British government to intervene with the Chinese authorities.

The Irish Waste Management Association (IWMA), which represents major recyclers and exporters of waste, acknowledged the changed market scenario, but insisted it was anticipated.

It said Irish waste processors had moved to upgrade their facilities to ensure better quality “recyclates” and diversify their export markets. It was confident of retaining much of its business in China.

However, IWMA director Des Crinion said it posed a particular difficulty for recycling bin waste, which was often contaminated or considered lower grade.

Mr Crinion said they were currently working on a number of schemes to improve the quality of exported materials. These involve reducing contamination at source and also improving the segregation at MRF – an investment costing €3 million.

He said China in recent years had moved to reduce paper contaminated with food and lower grade plastic, which was understandable as its economy was in a different place. In the past it had a huge cottage industry with cheap labour which cut out paper stickers on plastic film.

Last year IPR shipped 300,000 tonnes of recyclates, 70 per cent of which went to China. That has reduced to 60 per cent this year. Some 80 per cent of the exported material is paper, including cardboard, office paper, newspapers and magazines – contracts for which were not in doubt. Most plastic bottles which are made of PET (polyethylene terephthalate) are processed for recycling by two companies in Ireland.

The IWMA director said the Irish industry was improving quality, finding other markets and creating added value to their products.

“We knew this was coming. While it’s an issue for all recycling companies, it’s a natural progression. We believe it’s a good opportunity for companies in Ireland and Europe. I don’t think it will translate into increased costs for the Irish consumer.”

The option of fining consumers for putting incorrect material in recycling bins has coincided with controversy around changes being introduced to the charging regime.

Mr Crinion acknowledged recycling bins posed the most difficulties for the industry, but this was as a consequence of contaminants such as food and nappies. The variety of plastics was complex to contend with, so much that there would not be penalties for those who put “the wrong yoghurt pot” in a green bin. The most demanding requirement for IPR was to achieve a contamination level of between 1 and 1.5 per cent with paper for recycling.

The UK Recycling Association and Confederation of Paper Industries claimed China’s “recyclate import ban”, flagged to the WTO on July 18th, “goes against the grain of free and international trade”.