Historic trees to be felled for Dublin cycle route 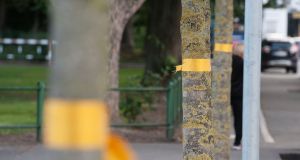 Trees lining the roadway at Fairview park, which are earmarked for felling by Dublin City Council to make way for a cycle path. Photograph: Dave Meehan

More than 6,500 people have signed a petition to stop the felling of 50 trees in Dublin’s Fairview Park, some of which are more than 100 years old.

Dublin City Council plans to chop down the trees as part of the design of a new 2.5km cycle route from Clontarf to the city centre.

City councillors, environmental groups and cycling organisations have said the trees should not be sacrificed to make way for the cycle path and an alternative solution should be found.

The council said the proposed cycle path could be scrapped if councillors do not approve the designs for its development.

A segregated cycle route from Clontarf to Amiens Street, providing a link to the Dublin Bay path which runs along to Sutton, was first proposed more than four years ago.

The route, from the seafront on Clontarf Road to the junction of Talbot Street and Connolly Station, had initially been proposed as an off-road track running in both directions on the east side of the road only. This would allow it to connect directly with the existing two-way off-road Dublin Bay cycle path.

However, in 2015 the council’s traffic department said a two-way path fully segregated from traffic would not be feasible because of the large number of side streets along the route. Instead it drew up plans for paths on both sides of the road. The paths would be “segregated cycle tracks where practicable” taking into account side roads and bus stops.

Detailed designs released for public consultation earlier this year indicated that 62 trees would be removed over the full length of the scheme and 160 new “semi-mature” trees would be planted.

However, the majority of the trees designated for felling – 49 out of the 62 – are in Fairview Park.

Thousands of people have signed a petition at change.org seeking the retention of the trees, some of which were planted in 1908 by nationalist and unionist communities as part of international Arbour Day celebrations.

A spokeswoman for the council said the trees designated for removal were mostly situated extremely close to the edge of the footpath and were “struggling to cope with competition for light from their higher neighbours”.

New trees would be planted prior to the felling of the old trees, she said. It was not possible to establish which trees were the ones planted in 1908, she said, because they had not been marked. However, consideration would be given to commemorating the Arbour Day ceremony by “naming and marking the new trees for the 32 counties”.