Authorities insist there has been no ‘dumbing down’ of the system 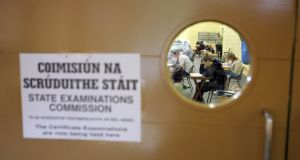 The surge in the numbers taking higher level and the dramatic fall-off in failure rates may suggest that the new system is simply a “dumbing down” of the old one. Archive photograph: Students at The Kings Hospital Secondary School in Palmerstown sitting a Leaving Cert exam. Photograph: Alan Betson/The Irish Times

It’s D-Day for some 58,000 Leaving Cert students (and their parents) who get their results today -- but this year there is a twist.

The class of 2017 are the first to have their exams marked with a new grading system with eight, rather than 14, score bands.

The impact of the changes has been dramatic: failure rates for key Leaving Cert subjects at higher level have dropped significantly as thousands of students benefit from a more generous grading system.

This is because an old E grade is no longer an automatic fail. Instead, students who score between 30 and 39 per cent at higher level get 37 CAO points for their efforts.

Across most of the main higher-level subjects, failure rates have dropped by an average of about 50 per cent.

For example, at higher level maths, just 2.1 per cent – or 344 students – failed the subject and did not receive CAO points. This compares to failure rate of 5 per cent last year, or 800 students, last year.

This pattern is repeated across higher-level courses such as Irish, English, history, geography, where the drop is failure rates ranges from between 20 and 80 per cent.

Not surprisingly, the new grading system is driving record numbers to take higher-level options across a range of subjects.

In maths, which benefits from bonus points, a record 36 per cent of students sat the more challenging paper. These numbers are almost double what they were five years ago, prior to the introduction of bonus points.

The surge in the numbers taking higher level and the dramatic fall-off in failure rates may suggest that the new system is simply a “dumbing down” of the old one.

However, the State Examinations Commission (SEC) insists there has been no change in the exam standards of the Leaving Cert.

Rather the change relates to how candidates’ results are reported to them through the new grading system, which is aimed at easing the pressure on students.

In truth, however, the reformed grading system masks some worrying trends.

The proportion of students scoring between 30 and 40 per cent – what would have constituted a fail under the old grading system – has increased at higher level.

Clearly, many students who would have been scared off taking the higher level option for fear of failure are now taking them on.

However, the proportion of students at ordinary level who are struggling and failing to secure any CAO points for their subjects has jumped dramatically in some subjects.

Unlike higher level, a score of below 40 per cent at ordinary level does not attract any CAO points.

At ordinary-level maths, for example, the proportion failing to get any CAO points has now reached 10 per cent.

This means more than 3,000 students, in effect, failed their maths, posing real difficulties in accessing a range of college course.

Some of the most dramatics increases in the proportion of students failing to secure CAO points for ordinary level subjects were in English (up 42 per cent) and Irish (up 64 per cent).

Much of this increase may well be down to a higher concentration of less-able students remaining in ordinary-level courses.

But the figures are also likely to point to concerns over teaching quality and difficulties accessing foundation-level classes in smaller schools.