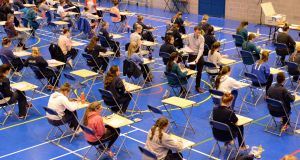 Students are continually told to follow their heart, but those looking to pick up points can’t help but look at where they are, statistically, most likely to do well. Photograph: Eric Luke

“Don’t worry, students won’t lose out under the new CAO points system.” Over the past year, the class of 2017 have heard this advice umpteen times. Now the results are in. So, is everything as straightforward as promised, or have students been shafted by the new grading system? And what, if anything, should future Leaving Cert students take from this year’s results when making their subject choices?

Much of the results are as expected; the papers are marked on a bell curve and the State Examinations Commission ensures that they are marked to the same standard every year. For most of the main subjects at least, the largest number of students secure H3 and H4 grades (formerly, these would have been from a B2 to a C2).

This year, music, art and minority languages continue to give the highest grades, while students on science subjects remain less likely to get top marks. There’s no great mystery as to why.

Music and art tend to attract students who have a natural aptitude for those subjects, while minority languages are almost exclusively taken by students who speak them at home. Science subjects, on the other hand, tend to be that bit more challenging for some students.

Here, we take a more detailed look at which honours subjects had the highest and lowest pass rates this year.

Higher-level Irish students who put in the work still have a fair chance of securing top marks. This year, 5.2 per cent of candidates got a H1, although this is down slightly compared to 2015 and 2016 where 6.5 and 5.4 per cent came came out on top. Overall, a not-too-shabby 89.4 per cent of higher-level students got between a H1 and H5. By some distance, this is the highest amount of top grades in any subject besides minority languages and music. For all the chatter about how badly Irish is taught, it’s worth giving some credit to teachers for this. It’s also worth noting a consensus that the introduction of 40 per cent of marks for the oral examination is widely seen as having improved engagement and standards: this year, the numbers opting for the higher level paper reached a high of 48 per cent. Is it possible that those who complain loudest about the language sat the exam aeons ago and so haven’t noticed the changes of the past five years?

This year, 5.8 per cent of students got a H1, compared to 5.6 per cent last year and 5.2 per cent in 2015 and 76.9 per cent secured between a H1 and H5 at higher level. The numbers taking higher level maths have been steadily rising and, this year, jumped to a record high of 36 per cent, up from 20 per cent in 2011. There remains an ongoing tension between those who want to encourage more students to take the higher level paper and those who say that funnelling more and more students towards the higher-level paper is leading to falling standards. Following the introduction of points for a H7 grade (formerly an E), the fail rate at higher level has fallen from 5.1 in 2016 to 1.3 per cent this year; however, the numbers securing below 40 per cent remain broadly the same.

This year, 38,749 students sat the higher level English paper. As usual, a very small number of students secured the highest grade in English, perhaps reflecting the difficult of crafting sublime prose and the somewhat subjective nature of writing, with just 2.9 per cent securing a H1 grade. Meanwhile, 10.7 per cent were awarded a H2, 20.6 per cent got a H3 and 27.3 per cent got a H4. Overall, 84.3 per cent got between a H1 and H5.

The new grading system means that students are now awarded CAO points for getting 30 per cent or more, whereas under the old system they were not awarded any points if they got 39 per cent or less. English already had one of the lowest “failure” rates at 1.2 per cent last year, but this year just 0.6 per cent – around 232 people – got no CAO points for higher level English.

Panel one: ‘Easy’ and ‘hard’ honours

Students are continually told to follow their heart when picking their Leaving Cert subjects, but those looking to pick up points can’t help but look at where they are, statistically, most likely to do well. Outside of minority language subjects, students taking chemistry or physics actually have the highest chance of picking up a H1, with 11.2 and 10.7 per cent, respectively, securing top marks. This compares to just 4.9 per cent who got a H1 in biology. However, the overall number of H1-H5 grades for chemistry and physics were, respectively, just 74.1 and 68.2 per cent, possibly reflecting that students with a high aptitude for these subjects can do very well but others may have to work harder.

By contrast, students taking on engineering and technical subjects tend to perform well when it comes to the H1-H5 grade bands in technology (89.3 per cent), design and communication (88.8 per cent), agricultural economics (88.4 per cent) and engineering (87 per cent).

Panel two: Yeah, but what’s a H2 really mean? Is that really a B?

Direct comparisons are between the old and new grading systems are surprisingly straightforward with, for instance, a H3 – broadly – corresponding to a B2 and B3 (see table). Perhaps the biggest change is the old E grade which, although not officially regarded as a fail, never gave any CAO points. It now broadly translates to a H7 or O7 and offers 37 points at higher level. This has resulted in a much lower “fail” rate than in previous years.

Two prominent critics, Danny O’Hare and Michael Ryan – both former professors at Dublin City University – say that the new system is unfair because if one student secures 70 per cent and the other secures 79 per cent, they will both get the same marks. But, overall, it does seem to have effectively reduced the enormous pressure on students. Whereas an “honour” in a higher level paper was previously seen as an A, B or C, this has now broadened out to H1-H5 grades (50 per cent plus).