Crowds at All-Ireland series fell by 40,000 – mostly in qualifiers and quarter-finals 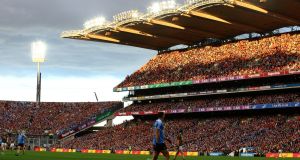 The 2016 All-Ireland final replay between Dublin and Mayo at Croke Park: Croke Park showed increased revenue, up €5 million to €41.5 million, and operating profit, up €500,000 to €10.6 million. Photograph: Inpho

The GAA’s top finance officers have expressed concerns about attendance figures despite the association’s finances for 2016 being described as “solid” and “steady” and showing a €3 million increase in gate receipts.

This is reflected in both the crowds at the All-Ireland series, which fell five per cent or 40,000 – mostly in the qualifiers and quarter-finals but the second successive year that a fall has been recorded – and the Leinster football championship in which attendances were affected by Dublin’s continuing domination and the clash of the Ireland-France Euro ’16 match with the provincial semi-finals.

The concerns were however more of a caveat in the context of financial reports that showed revenues and profitability rising again after a dip last year. Central Council income came in at €60.5 million, nearly €4 million up on 2015 while Croke Park showed increased revenue, up €5 million to €41.5 million, and operating profit, up €500,000 to €10.6 million.

Nonetheless GAA director general Páraic Duffy said the becalmed attendances strengthened the argument in favour of the championship reforms he had drawn up and which have since been endorsed by Central Council. These propose to introduce additional matches with a round-robin format at the All-Ireland quarter-final stage of the football.

“I think they probably do,” he said. “As Tom said football attendances have been falling at the qualifier stage – not so much from the quarter-finals on – and I do think if the proposal is passed it will boost attendances. It’s important not just from a financial point of view but from the point of view of how the games are perceived, more people going to games – I think it will help, yeah.”

The increase in gate receipts was helped by the first All-Ireland football final replay in 16 years but given that the same counties, Dublin and Mayo, also replayed a football semi-final in 2015 the benefit to attendances was negligible even if revenues improved to some extent.

The Kilkenny and Waterford All-Ireland hurling semi-final replay in Thurles was worth €1 million to Central Council. As the football final replay was worth in the region of €4 million the two draws in question essentially accounted for the increase in revenue on 2015.

Figures for 2016 also benefited from a full house at the football league final between Dublin and Kerry on the day of “Laochra” the 1916 commemoration, the staging of four Dublin divisional football matches in Croke Park as opposed to three this season and the fact the international rules Test against Australia at the end of 2015 came into the current accounting period.

“Under Dublin, the first thing is to say that the money is being well spent. I’d be far more uncomfortable sitting here if that level of investment wasn’t being put to good use and I do understand the dynamic when people look at on-field results, then look at the amount of funding. I’m not sure the degree to which there’s a 100 per cent correlation but it would be naive to assume that there’s not some degree of correlation.

“What we’ll try to do, we’ll try to grow the other counties. If you look at last year’s one, I think you’ll see we have tried to do that. We have achieved that to a certain degree and we’ll try and do that next year.”

Ryan also expressed concern about the cost of insurance claims, the most sizeable of which – 66 per cent of the total – he said were related to non-GAA-core activities. He was however reassured that the situation was more “under control” than in recent years.