GAA’s strongholds waste no time in marking their territory 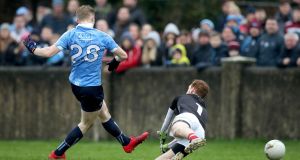 The GAA’s football hors d’oeuvres – if that’s not overestimating their nutritional value – were scoffed at the weekend by a variety of familiar diners. Dublin’s development team recaptured the O’Byrne Cup after a two-year gap after an impressive second half before about 3,000 spectators in Drogheda left Louth trailing in their wake.

Galway repeated last year’s success against Roscommon in the Connacht league final, which set alongside Tyrone’s sixth consecutive McKenna Cup in Ulster and Kerry’s victory in the previous week’s McGrath Cup final, means that all of last year’s senior provincial champions have emphasised their status by winning the various secondary competitions in each of the provinces.

Dublin’s acting manager Paul Clarke and his players are probably the county’s happiest ever O’Byrne Cup winners and he said that he and his management would be briefing Jim Gavin in advance of next week’s opening of the football league.

“There’s a number of things have to be done, so I’ll sit down with Jim Brogan and Jim Gavin and Bryan Cullen to discuss all these sorts of things. We’ll discuss everything about them. Bryan Cullen will discuss the gym work they did and how they’ve improved there. We’ll discuss the performances and positions and how they did when they came in. I’ll be telling Jim about when we brought lads in as subs, the instructions they were given and how they were able to follow those instructions.”

His Louth counterpart Colin Kelly had reacted irritably to suggestions that his players would be facing Dublin’s understudies and looked resigned to the direction the post-mortem might take.

“Disappointing. I’m going to have to listen to a load of stuff now about the Dublin third team.

“For 35 minutes we had serious domination – possibly should have turned 1-10, 1-12 to four or five points ahead. There lies the problem. We didn’t and when Dublin got their period of domination, their skill-set shone through. Some of their shooting was very, very good.

There were inevitable questions about what it all means for Leinster in the year when Dublin set off for a 12th provincial title in 13 seasons. Kelly believes that it’s all cyclical and that the province is currently in a lull. Overall though, he’s not getting carried away with the implications.

“Where do you go to from here?” he was asked.

“Down to Portlaoise next Sunday,” came the glum reply.

Clarke was asked was he sure that was it for his managerial involvement.

But a 100 per cent record in competitions entered?

“Better than Sam Allardyce and no money involved! I can ride off into the sunset.”

In hurling, Cork won the Munster league final with an exciting win against Limerick in the Gaelic Grounds. Alan Cadogan’s last-gasp goal brought up a 1-21 to 1-20 success. That represented a big improvement for the home side who lost by 21 points when the counties met a fortnight ago.

In Leinster’s Walsh Cup final, Galway will face a Kilkenny side that just about survived their first brush with David Fitzgerald’s Wexford in New Ross. Having levelled the match late on, the home side endured the frustration of going down to an injury-time free, pointed by Kilkenny’s Alan Murphy.