Replays a big factor as GAA revenues rise in 2016 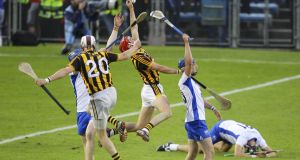 The Kilkenny and Waterford semi-final replay in Thurles had been worth €1 million to Central Council. Photo: Ken Sutton/Inpho

The GAA recorded a rise in revenue during 2016, with Central Council taking in just over €60 million. This restores the association’s income after a marginal decline in the previous accounting period – the first in five years. The total of €60.5 million is up by nearly €4 million.

Gate receipts also recovered with an increase of €3 million even though the All-Ireland series (including qualifiers) recorded a drop in attendance figures. The overall picture was helped by the All-Ireland football final going to a replay but given that the same counties, Dublin and Mayo, also replayed a football semi-final in 2015 the benefit to attendances was negligible even if revenues benefited to some extent.

He added that the Kilkenny and Waterford semi-final replay in Thurles had been worth €1 million to Central Council.

GAA president Aogán ó Fearghail described the results as “solid,” a view echoed by the association’s Director of Finance Tom Ryan, who announced an operating surplus of €10 million, up 29 per cent on last year and said that there had revenue growth in both league and championship.

He reported that revenues from the national leagues had gone up by €800,000 – a figure greatly helped by the football final in which Dublin played Kerry on the centenary of the 1916 Rising, which was commemorated by the Laochra performance at the end of the match.

On the expenditure side, distributions to the counties and other units were up by a million to €13.5 million.

Ryan expressed concern about the cost of insurance claims, the most sizeable of which – 66 per cent of the total – he said were related to non-GAA-core activities. He was however reassured that the situation was more “under control” than in recent years.

Croke Park’s profitability was also back on track after a dip in 2015 of €1.8 million. Revenues were up by €5 million and profits by just over €2 million and stadium director Peter McKenna was able to announce a slightly increased grant to Croke Park of €7.5 million.

1 Roger Federer, the god of tennis, returns to Mount Olympus
2 Sideline Cut: Vignette shows why Bird is the true shark in The Last Dance
3 Ken Early: Liverpool fans, Bamber Gascoigne and a close shave in Istanbul
4 Tiger shines and Brady bites back as charity match proves an enjoyable release
5 Coming fourth in the Olympics didn’t change this fearless quartet, time did
Real news has value SUBSCRIBE