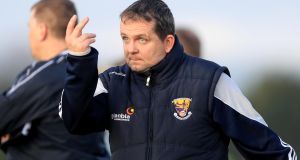 While Murphy’s late score looked to have secured his side’s passage through to a final meeting with Galway, the model county did have one final chance to add yet another plot twist.

Straight from the puck-out, they worked the ball cleverly downfield leaving substitute Cathal Dunbar with a goal chance, but his effort was superbly pushed around the post by ‘keeper Richie Reid. Before Lee Chin sent the resultant 65 narrowly wide.

Kilkenny manager Brian Cody was delighted with the result, and impressed by the opposition -

"We knew we were going to be put under pressure in this game because Wexford have been on a high over recent weeks. But no team will lose the run of themselves after this game, it’s still very early season.

“Still this was a hugely competitive game which went right down to the final whistle. This was a positive result for us, we’ll go away and now look forward to Galway on Sunday next.

“I was quite happy with everything that happened out on the pitch to day, the lades showed commitment, hurled well in trying conditions, against what was a hugely competitive and impressive Wexford side.”

New Wexford manager Davy Fitzgerald meanwhile was delighted with the large crowd support, but is still urging patience as a long season awaits.

“You could sense the crowd getting frustrated in the first half, that will have to stop, give the lads a chance. They have spent the last 20 years and won nothing. I know what it takes. When I went into Clare it took a year, a year and half. The lads are putting in a massive effort.

“We have been trying different things. Have tried 23/24 players in this competition. We have Conor (McDonald) missing today, with a blood infection from the Dublin game, Jack (Guiney) is only back a week after hamstring (injury), then the three cruciate injured players. There was seven to eight who did not play today. Hopefully we will have them back in contention for the opening Limerick league game.”

Kilkenny began brightly, bursting into a 0-4 to 0-1 lead inside the opening fifteen minutes. Eoin Moore had Wexford’s opening score after twelve minutes.

Wexford went on to hit two unanswered points through Chin and Matthew O’Hanlon, but it was Kilkenny who continued to push on leading 0-7 to 0-4 at the interval.

Wexford loosened up more after the resumption - Chin slotted three points and after 45 minutes the sides were level, 0-8 apiece.

Kilkenny came again with points through Murphy and Cillian Buckley, leaving them leading 0-13 to 0-10 ahead with twelve minutes remaining. Wexford though finished the stronger to draw back level, but then came Murphy’s late winning pointed free.

“Still in the second half we worked some fine moves, picked off some fine points. I don’t think Kilkenny created a single shot for goal, which is something against them, but we created two or three.

“What I liked is we were three points down at half time, fought back. When they went ahead at the end, we still came back and created the goal chance. The player went for the goal. I was delighted with that, he could have slipped it over the bar. I will always urge my players to go out and express themselves, make up their own mind when it comes to chances like that. That’s what it’s all about.

“I would love to see them do something and bring home some silverware. Look it’s January, so hopefully the improvement will continue. At the end of my two years hopefully something will have happened.’

Galway hurlers reached the Walsh Cup final after they hammered a weakened IT Carlow at Pearse Stadium.

Second-half substitute Shane Moloney hit nine points while McInerney’s second goal in the 50th minute gave Galway a cruise to the finish line. With a Fitzgibbon Cup tie in midweek, Carlow fielded a second string side.

1 Tipping Point: DeChambeau’s transformation raises questions, but who will ask them?
2 Patrick Mahomes reported to have signed 10-year $400m deal with Chiefs
3 Matt Williams: Six Nations must recognise the desire for revolution outside Europe
4 World Athletics freezes out Russian athletes after $5m fine goes unpaid
5 Monica Seles: The warrior queen who could have been the best ever
Real news has value SUBSCRIBE