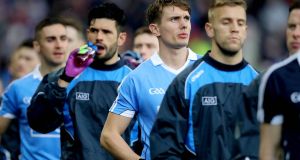 Michael Fitzsimons started for Dublin at corner back in the All-Ireland final replay against Mayo. Photograph: Ryan Byrne/Inpho.

These are anxious days for the Dublin footballer, the county’s near embarrassment of riches leaving most players uncertain about if or when they’ll next get their chance to shine. And no one understands this scenario better than Michael Fitzsimons.

Sunday’s successful climax to their O’Byrne Cup campaign has magnified the undertaking: with all of Jim Gavin’s All-Ireland winning panel kept in reserve, deputy manager Paul Clarke was tasked with unearthing “four or five” new names ahead of this Sunday’s opening game of the Allianz Football League against Cavan.

Instead, Clarke reckons, he’s unearthed “eight or nine” – Niall Scully, Ciarán Reddin, Colm Basquel, Paul Hudson, Ross Hazley, Jason Whelan, Conor McHugh, Emmett Ó Conghaile and even goalkeeper Evan Comerford among those putting their hands up for a jersey over the coming weeks as Dublin look to win a fifth league title in succession (a feat last achieved by Mayo back in the 1930s).

Not even Scully, man of the match in Sunday’s nine-point win over Louth, can be certain about breaking into a Dublin defence that will also welcome back Jack McCaffrey from his 2016 wanderlust.

Fitzsimons, however, perfectly represents the ideal outcome of the process. The only game Fitzsimons started for Dublin last summer was the replayed All-Ireland final win over Mayo, taking over from Davy Byrne at corner-back, where he seized the day with such ferocious enthusiasm he ended up man of the match.

He’d come off the bench in their six championship matches up to that point, patiently biding his time until the ultimate chance to shine. That’s the lesson quite a few Dublin footballers may have to learn in 2017.

“I’m under no illusions that I’m somehow in a position better than any other year,” he says. “And I can’t tell what Jim Gavin is thinking. There is huge competition, and each year I go in I want to improve myself, and I feel if I do that, I should start, or get into a good position [to start].

“Obviously I’d prefer to be playing as much as possible, but it’s a team game, so wherever I end up at the end of it, as long as I can contribute to this team I’ll be delighted. I suppose I hadn’t played much last summer, so my contribution wasn’t as I would have hoped. But again I’m well aware of the competition, so I just kept at it.

“If you felt you hadn’t performed well the previous year, and you weren’t successful, it might be a bit more difficult. It’s hard to say. But you always want to improve yourself, so I’ve found that each year I’ve always been hungry to get back.”

Indeed at 27, Fitzsimon’s wider career represents this process: he was no minor or under-21 standout (instead coming up through the junior ranks), yet was first-choice corner back in their 2011 All-Ireland winning team, starting that final win over Kerry (the first Cuala player to start an All-Ireland for Dublin since the late Mick Holden, in 1983).

Only by 2012 he’d lost his place, initially through injury, then, when Jim Gavin took over from Pat Gilroy, he needed to earn his place all over again, and didn’t feature at all in the 2013 All-Ireland win. In his own head though he knew what was required to win that back that place.

“I think I’m beyond self-doubt at the moment. Previously when I was younger self-doubt would creep in but I think I’m mature enough not to fall down that pathway. But it does drive you on.

“You go through a range of emotions, frustration, anger . . . But you have to face reality. Like if I was a bit blind to that or blind to myself that I’m not on a team that’s got plenty of competition I’d get more frustrated and sometimes that hasn’t helped with my performance.

“So I’ve actually been through it since sort of 2012 and 2013 onwards, where it’s been ups and downs in my season. So I’ve actually learned a lot. Whereas previously say if I wasn’t playing come the quarter-final, I’d start trying to make these drastic changes in my game during the summer to try and do something, And at the end of the day I’d start making mistakes because I was doing stuff I wasn’t doing week-in week-out.

“But from now on I sort of trust my own ability, trust the way I play and have a bit more patience. I sort of understand that there’s huge competition and I’d back myself a bit more then. Fortunately enough things fell my way.”

Reflecting on that replay (he hasn’t yet watched the full match video), Fitzsimons admits he had no great inkling things were going his way: “Not really. When you’re playing well, it just sort of goes past you, very quickly. You don’t over think it.

“Whereas when you’re playing poorly, you’re thinking every single move and you’re really aware of the consequences of your actions.

“The only two stages where things slowed down were when I probably could have taken my point at the end and also, when I turned my back on a kick-out. It could easily have gotten kicked to my back and Stephen (Cluxton) let me know all about it. So those two moments, I was aware of, but to have only two moments when you’re a bit self conscious about yourself in the game like that is pretty good.”

On Sunday the process begins again.