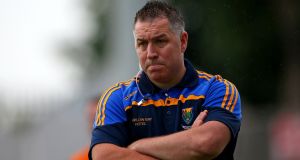 They share Dublin’s entire southern borderline, the same language and currency and culture, yet in Gaelic football terms may as well be a world apart. So should Wicklow benefit from a more liberal cross-border agreement?

Johnny Magee thinks so – and he has seen things from both sides. Now in his third season as Wicklow manager, Magee won two Leinster titles with Dublin and also captained Kilmacud Crokes to an All-Ireland club title in 2009: his best hope for Wicklow this season is promotion from division four of the Allianz Football League.

Dublin, meanwhile, are going for a fifth league title in succession, having just won the O’Byrne Cup with their “third” or rather developmental panel. Only a handful of those will go on to play for Dublin, while Magee would be gladly get his hands on even one of them.

“Look, if any of their parents were from Wicklow, obviously you’d entertain it,” he says. “And if you look in and see their calibre of player, even club football in Dublin, it is very strong. A lot of the top clubs in Dublin are training as hard as some county teams, so it’s no surprise.

“The thing is, there are good footballers in Wicklow. It’s just trying to get them all out on the field. But it’s not like-for-like. Dublin were training down in Carton House last weekend. The team that wasn’t playing in the O’Byrne Cup. Carton House, like. So for me, there has to be some sort of a grasp here.

“I hate harping on about it, but it’s down to resources, and looking after players, and yes, Dublin have pulled away, and you can see it. For me it’s very hard to sell it to a player. There have been players who have said to me ‘no Johnny, what’s the point?’

“I don’t mind getting beaten by a better football team on the day, or if they’ve a better game plan or tactics. What I do have an issue with is if they blow you out of the water because of sheer physicality and fitness and strength. Dublin have a full-time strength and conditioning coach, high performance coach, a proper chef who’s there to prepare their meals.”

Whatever about importing some Dublin players, Magee believes Wicklow would certainly benefit from some of Dublin’s resources. He was speaking at the announcement of Joule heating manufacturers taking over the sole Wicklow sponsorship for the next three years, while Dublin currently benefit from 12 different sponsors (including cars, nutrition, gear, etc).

“Getting the sponsor in was crucial, it adds to what we’re trying to do. Players notice these days. They’re aware of what others in supposedly top counties are getting. So you’re trying to give them what all the best players are getting.”

The Joule sponsorship means for the first time the Wicklow players will benefit from GPS monitoring at training (at a cost of about €30,000), although in some ways, that also highlights the differences between the likes of Wicklow and Dublin.

“They’re getting live feeds off the GPS units to the sideline now, but if you score 2-3 for me, for Wicklow, and you’re telling me ‘Johnny, I’m out on my feet’, I’d be kicking you back on to the field, saying ‘Stay on there and get another 1-2.’

“Whereas if a Dublin or Kerry player scores 2-3 and he’s gone from green to amber to red [on his GPS], and he’s fatiguing, he’s whipped off straight away for injury prevention. And he’s being replaced by a player who mightn’t be as good quality wise but with regards to fitness and strength he’ll go in and do a job. The other point is why can Bruce Springsteen play in Croke Park more times than one of my players? My players have never played there.”

Kevin O’Brien, who won Wicklow’s first and still only football All-Star in 1990, also agrees the county would benefit from some sort of wider cross-border arrangement. “There are a lot of quality players in Dublin who aren’t going to get any intercounty exposure, and that must be frustrating. For Wicklow, to get two or three of those, would be outstanding. And I’ve seen just some of them in Dublin. I was doing a bit with Donabate, huge men. I don’t know if that’s the way forward but it would make a huge difference.

“And I’m sure if I was one of those Dublin players, maybe won a county title, trying to get into the Dublin team, it must be frustrating. And sometimes it would be easier to come down the road here to Wicklow than it would be to go to Parnell Park.

“You need to have some control over it, but players want to challenge themselves at the next level. Can we cut it at intercounty? Will I ever get the opportunity? But at the end of the day players still have to put the work in.

“We do make excuses in the weaker counties, let’s be honest, hidden behind them. I’m fed up hearing about the Wicklow mountains. I’ve heard that excuse so many times we could have had the mountains levelled by now. There are mountains everywhere.”