Dublin focus on the foothills can help fresh summit attempt

Having rested the stars and fired up the understudies, Jim Gavin is spoilt for choice 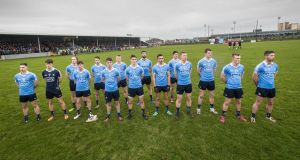 Such has been the rumbling despair about the Dublin footballers’ current years of plenty that the hype can hardly intensify too much despite the dawning of a year that could see a first All-Ireland three-in-a-row in more than 30 years and a first for the county in nearly 100.

There has been an interesting subplot though running throughout January, as Dublin fielded an experimental/development/third team in the O’Byrne Cup and, to deepen the gloom around Leinster, convincingly won last Sunday’s final against a reasonably well-stacked Louth side.

You had to have sympathy for defeated manager Colin Kelly, who had tried to head off some of the potential downside of an unsuccessful final by berating the media for “disrespect” in labelling Dublin’s selection. Sure enough, when it was all over he sighed that he was “going to have to listen to a load of stuff now about the Dublin third team”.

Ironically Dublin had had to cope with the same perception. When last year’s championship panel were whisked off to Jamaica, those called up in their place were equally aware that they were categorised as a fringe panel, assembled to fulfil the fixtures.

They opted to embrace the message from Gavin and Clarke that this January they would be THE Dublin team and responded accordingly. It’s a hard task because normally when a player is being meaningfully trialled he comes into to an environment where there are a number of senior players to allow him the space to show what he can do.

In this case the requirement to unite as a team and take leadership roles was an additional challenge but the pay-off, a terrific opportunity to audition for this year’s league campaign. So it was win-win, an additional month’s rest for the senior panel and a meticulous trawl through the likeliest aspirants.

Form can’t be turned on and off and a couple of the most recent four league wins were opportunist and facilitated by the semi-final structure, which is no longer in place. Yet competition for places will maintain performance levels and in critical matches, the team’s experience of negotiating tight spots will be an advantage.

Although the litany of success under Gavin is taken for granted it is phenomenal. The only major trophy not won in four years was the 2014 All-Ireland: that’s 11 out of 12.

Although four league titles on the bounce is significant silverware those campaigns have also been notable for the cultivation of competition inside the panel. Yet during those four campaigns, as various players have or have not taken the opportunity for advancement just five matches have been lost.

Last season Dublin holidayed in December and were for the most part present and correct for the start of the year. When Longford turned them over by six points in the O’Byrne Cup semi-final the starting 15 included 10 players who would feature in the All-Ireland final and replay later in the year.

This time around the champions didn’t go away until after Christmas and Gavin asked an All-Ireland winning trio of Paul Clarke, Jim Brogan – a long-time consigliere – and 2011 captain Bryan Cullen, the county’s High Performance Manager, to run a development team with a view to producing live candidates for trialling in the league campaign.

It’s not just about forging rivalry for places. There is also the potential need for supplementary troops if the county’s success in avoiding injuries to key players were to falter.

Winning the O’Byrne Cup wasn’t an end in itself although it was an impressive discharge of the responsibility handed to the understudies. A number of players were to be recommended to Gavin after the series of five matches. Having thought originally that number might be four or five, Clarke by the end had revised the estimate upwards to eight or nine.

Some are obvious, like Niall Scully whose pace and control at wing forward and wing back were consistently on view or Paul Hudson, who was over the campaign the most effective ball winner in the full forward line and who has league experience and Colm Basquel, still an under-21 but elusive and creative on the ball. Others will emerge from the debriefings between Clarke and Gavin.

It will still be only half the exercise. How will the chosen few respond to sharing a dressingroom with some of the game’s most prominent players? How quickly will they slot into the team and how effectively will they learn from playing the best counties?

Brian Fenton emerged two years ago during the league, playing regularly and quietly impressing. He was at centrefield for the 2014 All-Ireland under-21 champions but hadn’t been earmarked like team-mates Jack McCaffrey, Cormac Costello and Paul Mannion and yet he came through ahead of seven others from that team, who were playing in Drogheda on Sunday, and has been an All Star in both of his inter-county seasons to date and the Sunday Game’s Footballer of the Year last season.

His most striking asset was the ability to absorb lessons as he went up the ladder. The first big step was facing Mayo in the 2015 All-Ireland semi-final. Clearly reaching to keep up with the gear-change in intensity during the drawn match he still managed to readjust successfully in the replay and go on to be Man of the Match in the final against Kerry.

There was no way of telling until he had to process those challenges. For this year’s batch of hopefuls the same journey of discovery will start in the weeks ahead and may well prove essential to the county’s three-in-a-row prospects.