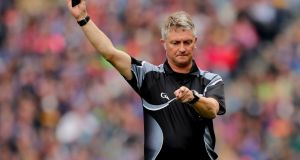 Barry Kelly: “There are cynical fouls in hurling – no question about it. There’s no reason not to use the black card to sort out the obvious fouls, like tripping and the pull-down.” Photograph: James Crombie/Inpho

Former All-Ireland final referee Barry Kelly has said he supports the introduction of a black card into hurling to address cynical fouling. The matter is currently being considered for submission to GAA Congress but is likely to attract opposition from with the game.

For Kelly, there is no cause for concern in the proposal, which he believes is now more attractive since the GAA amended the black card penalty to be 10 minutes in the sin bin rather than replacement for the remainder of the match.

“It’s not a precise analogy but if you’re the most careful driver in the world, you won’t care that it’s five penalty points for careless driving because you won’t get caught. Therefore, what’s the issue?

“I’m more in favour now with the current sanction of the sin bin. For instance a friend of mine refereed a schools’ game where very early, a player was blatantly foot-tripped. He said that it was much easier to give this guy 10 minutes on the line rather than expel him for the rest of the game.”

The standing committee on the playing rules has recommended that steps be taken to deal with cynical or calculated fouling in hurling, which would bring it into line with football, which introduced the black card six years ago.

The SCPR commissioned research, which showed that of 625 fouls committed over 20 matches between 2017 and ’19, 48 were “cynical or disruptive conduct, of which 29 were ‘professional’ – no attempt made to fairly win back possession.

It further notes that of these 29 professional fouls, 16 attracted a yellow card, one a red and in 12 cases no sanction at all.

It’s a trend Kelly has observed and he believes that the type of fouls involved are deliberate.

“There are cynical fouls in hurling – no question about it. There’s no reason not to use the black card to sort out the obvious fouls, like tripping and the pull-down – blocking isn’t as common in hurling but the black card has had a huge effect on it in football.

“When the All-Ireland quarter-finals are being played next July in Thurles or wherever, players will haul their mother to the ground if they have to.

“Another interesting effect in my view is that it doesn’t have the psychological impact on a referee that a red card does. It’s human nature in a lot of cases to give the 50-50 calls to the team down to 14 even if the red card was entirely justified.”

Neither does he believe that the extension of the black card would be an unfair imposition on hurling referees, as it is a change of penalty rather than a new playing rule.

“If you go through the list of inter-county hurling referees, there are very few who don’t also referee football so they’re well used to it. Also hurling’s not like football in that it hasn’t had a plethora of changes introduced to add layers to the rules of an already complicated game.”