McShane trial unlikely to create precedent according to Earley 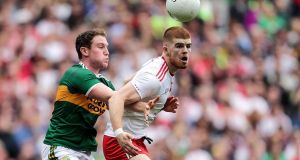 Cathal McShane: his decision to remain in Tyrone will be a significant boost for Mickey Harte’s squad. Photograph: Laszlo Geczo/Inpho

The good news for Tyrone that All Star forward Cathal McShane will not be taking up a career with the Adelaide Crows hasn’t surprised former AFL footballer and Ireland international rules coach Paul Earley, who doubts there will be an exodus of established forward talent to Australia.

“I was very surprised originally to hear that Cathal McShane was to go over,” said Earley, “as it would be so difficult to make the transition to an intense professional game at that age.

“At the age of 18 or 19, the gap in strength and conditioning has narrowed a little but when a player gets into his mid-20s, his body is used to a certain set of demands and then you’re suddenly into a new methodology and the intensity of training in Australia, twice a day in high temperatures is very demanding – before you come to terms with learning a new game as well.”

McShane, who was the top scorer in last year’s football championship, spent a couple of weeks Down Under before deciding that he wouldn’t pursue the project.

The Adelaide club’s website said on Thursday that McShane, who is 24, had decided that, “it was in his best interests to stay in Ireland after weighing up all considerations”.

Speaking to BBC Sport, the player said that a job offer with Keystone Lintels in Cookstown had helped to sway his decision and according to Tyrone manager Mickey Harte in the same report, there had been a distinct possibility of the player migrating.

“I’d been talking to him regularly since he came home. It did look like he could be on his way. It was a good enough deal that he had out there. He was happy with it. We couldn’t be stopping him. We just wished he wouldn’t go. We believed we could give him something just as good at home here.”

Despite forebodings that the recent rule change, introducing the forward mark in football was moving the GAA game closer to the AFL, Earley, who played for Melbourne in the mid-1980s, doesn’t share the alarm, pointing out that all of the Irish recruits have exhibited that skill but very few have impacted in attack in the AFL.

“It’s a red herring,” he said. “Go back 30 years and how many Irish players have played in the forward line in Australian Rules? They’re not just going to say, ‘okay there’s a forward mark in play now they’re more appealing to us and can play in the forward line’.

“It doesn’t work like that. Most Irish players are good at catching the ball, anyway. If they want someone at full forward, he’s got to be 6ft 4in or 6ft 5in probably and we don’t produce too many of those.”

Although Irish players have made the transition more quickly in recent years, there is still a reasonable acclimatisation period before a senior career gets started.

“Marty Clarke [Down All Star forward] broke into the senior team very fast,” said Earley. “But I think in general it’s probably in the second season or start of the third season that Irish players start to break through but even then there mightn’t be regular call-ups.”

For instance, Colin O’Riordan, from Tipperary, who played directly against McShane in an All-Ireland under-21 final, signed for Sydney in 2015 and has been given a couple of contract extensions but didn’t get his first run of regular games until last year.

That would have made McShane in his mid-20s by the time his career got up and running, another consideration he presumably took into account. It has also been the case that players from Ireland don’t feature much as forwards.

“Most players from the GAA tend to play off the back line in Australian Rules,” according to Earley.

“They do that because they feel we learn the game quicker, facing the ball.”