Only hope now is he comes home, apologises to the lads and makes the ‘savage’ contribution 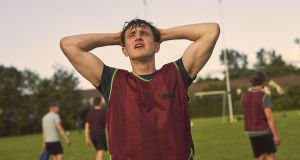 Only a fool could fail to see that Connell is being torn apart by the club dilemma. Photograph: Enda Bowe/Element Pictures/RTÉ

Much has been said and written about the success of Normal People, the television show about two lovelorn Sligonians who are disillusioned with Trinity College, capitalism and Tubbercurry in general.

It’s been the one happy story of the entire Covid crisis: an Irish-made television show which has swept the world with the unnerving speed of the pandemic itself. When a fictive Tubbercurry’s Centra has entered the mind-space of the sisters Kardashian, you know there is something trippy going on.

Obviously Normal People has caused a stir. There’s been too much national debate about all the solemn sex, way too little about the nifty soundtrack, almost nothing said about the dreamy interior of Killoran’s bar and a criminal neglect of the true theme of the show.

Normal People is nothing if not a devastating study of how the uncertainty of the GAA club championship fixtures calendar can reap havoc on a young’s man life. If this show doesn’t convince them above in Croke Park to ‘fix the calendar’ for once and for all, then nothing ever will.

It’s made clear that Connell, the hero of what is essentially an old-fashioned love story featuring gloomy youth, is a GAA man. He’s Young Werther – but with a handy left peg. You can see it is his wardrobe, in the gym-crafted physique and the slight look of perpetual worry of the big-lunged attacking-defender who knows, deep down, that he hasn’t got the work done to face Tourlestrane in the first round of the Sligo championship.

He’s basically facing the same dilemma as hundreds of west of Ireland lads. He’s loyal to the club and devoted to the parish. He knows that he is probably too good to be dropped from the team. He’s away at college. Part of him feels like a clown for even being at college – studying English!!! – instead of staying home and keeping it real.

The other part of him doesn’t want to come home. One of the reasons is that he knows that “the boys” will be going through brutal Saturday morning purges on the sand dunes or on the pitch. It’s much easier for him to waft around the halls of Trinity and disguise his loathing for the moneyed classes who try their best to be friendly but are utterly clueless about the insane pressure of keeping Tubbercurry GAA club at the top of the all-time list of Sligo championship winners.

It’s handier for Connell to say nothing – which he has elevated to an art form- and to text half-hearted excuses to the manager about why he is arsing around a villa in Tuscany rather than heading across to Achill with the lads for a bonding weekend involving paintballing, rebel songs and 28 bottles of Jaegermeister.

Connell is not a happy camper. The surface assumption is that the poor lad is pining for Marianne, his sometime girlfriend/soul mate, but only a fool could fail to see that he is being torn apart by the club dilemma. And let’s be honest, his coping methods are precisely in keeping with the sort of self-destructive behaviour that has led to many a grievous falling out between manager and college player.

If Connell isn’t bailing out of an offie stacked with goodies, then is he pictured taking a lonesome pull on a smoke in one of south Dublin’s many well-tended twilight gardens. His diet, unless Marianne takes a notion to rustle up a five-star meal, is appalling. He stays up way too late. Ten episodes in and he hasn’t hit the gym once even though the club has probably stumped up for membership. This is a lad who almost certainly played county minor and who has watched fellas he used to regularly boss quietly and diligently work towards a path on the Sligo senior squad while his is just treading water. And what’s he at? Sitting above in Dublin, scoffing at Derrida and allowing the fact that he is letting the club down to slowly but surely gnaw at his soul. It’s painful to watch.

If you are not up to speed with Normal People, in the most recent episode, Marianne, the heroine, is over in Sweden studying something or other and she’s fallen in with a local sort called Philip. There’s no escaping the fact that Philip is a photographer and also a bit of an arsehole who is doing nothing positive for Marianne’s already bleak worldview.

Connell intuits this but is strangely impotent in his resolve to do something about it. Come Tuesday night last, the entire nation of Ireland was only crying out for Connell to throw on the Tubbercurry jersey, to grab a Ryanair flight to Stockholm and to catch a hould of Philip – in the immortal advice offered by Páidi Ó Sé to the Westmeath footballers – “like you’d catch a loaf of bread and f**k him over the line with a shoulder”.

But he’s torn between two places, those twin towns of heart and soul. This is clearly summertime and off-screen, miles away from the photographic/light bondage scene of hipster Scandinavia, there’s a Sligo bloody championship taking place! And Connell knows where he is supposed to be.

The GAA has always been highly sensitive and alive to the subversive threat of television and you can be sure its custodians are well acquainted with the dangers posed by Connell’s televised meltdown. For years, clever advertising campaigns have solidified the idea of the GAA club man as a stoic, unyielding hero who enjoys nothing better than trudging for 10 miles across rain-lashed roads while he recovers from a cruciate injury, just living for the day when he can pull on that jersey again. Mud, hypothermia, heartbreaking defeat: the club man can’t get enough of this kind of penury, particularly if it is set to a Hans Zimmer soundtrack.

Then along comes Connell to ruin it all by gazing wistfully across the Italian interior, cinematically drawing on a cigarette and then retiring for an evening of sensually filmed lovemaking with Marianne. Why in God’s name would any young man choose to live like this when he could be back home getting turned stupid on the field by late-vintage Eamon O’Hara and roundly abused by the supporters who know fine well that he has been doing feck all for the year?

Connell is, of course, on a fast track to the reserves and it is only a matter of time before his membership lapses, he drifts away from the club and becomes a kind of folk memory around the pubs of his local town. They’ll romanticise his best games – that rainy day against Enniscrone in the under-16s, the row against Eastern Harps. Nobody will know what became of him – there’ll be rumours that he is a professor of English or an acclaimed if impenetrable poet or an international film star and they’ll shake their heads at the pure waste of talent.

It’s hard to know how the final episodes of Normal People, which air next week, will end. But the hope that Connell gets his shit together, comes home, apologises to the lads, commits to training and makes the ‘savage’ contribution that gets Tubbercurry over the line in a bruising county final – played in December gales because, as we all know, the way the GAA calendar treats the club player is a bloody disgrace – well, that hope is a forlorn one. Connell is a lovely lad and it’s said that he could have been the best since Mickey Kearins. But if he doesn’t have the commitment; if, as it seems, he doesn’t want to die for the jersey well then – and it pains us all to have to say this – just maybe the club is better off without him.

1 Game Changers: Gary O’Toole took a stand when others turned their heads
2 Gerry Thornley: Munster will make for interesting case study when rugby resumes
3 Georgia and Fiji in line to join Six Nations sides in eight-team tournament
4 James McClean says he gets no support for abuse he receives
5 Roger Wilson tackling the problem of bad technique in Texas high school football
Real news has value SUBSCRIBE
Here is your handy guide to sport on television this week