Schooldays over: Ireland’s Class of 2020 cheated out of a proper ending 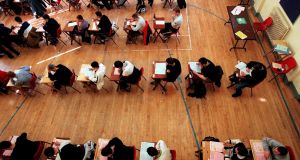 “You may not like this system but grumbling about it is a waste of time. A luxury you cannot afford.”– How To Cheat In the Leaving Cert (1997).

It’s 23 years now since Graham Jones directed his whip-smart black comedy about a bunch of disenchanted Dublin kids who decide, for reasons both personal and philosophical, to try and beat the examination system that has been a rite of passage in the lives of Irish teenagers for decades.

There has always been something sacred and forbidding about the examination system, with its pink and blue papers, those locked boxes and the annual summer post-exam agony and ecstasy over whether this poet or that algebra question “came up” and whether geography was a “nicer” paper than last year.

There’s a scene in How To Cheat in The Leaving Cert which will bring a shudder to anyone who has ever passed through the Irish school system: the neat rows of plain tables and chairs forming a grid across some ancient basketball hall and the bowed heads of dozens of students. Who would be there again?

Everyone knows that, deep down, it’s a faintly mad system: a two-year educational cycle in which students get a terrific grounding from dedicated teachers in a variety of subjects the result of which is reflected – or not – on a three-hour written performance dependent on learning by rote, reasonable handwriting and organisational skills.

It’s a flawed system that works for most. But not for all. Professor John Crown is one of Ireland’s leading medical practitioners. On Friday, he took to Twitter to note that if his Leaving Cert class of 1974 had been cancelled and replaced by class work, then he “would not be a doctor and probably not a graduate”. He was, in other words, one of the countless who kind of winged it and backed themselves to sprint through those marathon examinations.

For decades, schoolkids idly dreamed of school being cancelled due to freak events so they could get a lie-on. This year, out of the blue, it happened and after a few weeks, the students discovered they wanted to get back to school. For the vast majority, the Covid crisis was like a bomb that blew their social and academic world to smithereens and was on a daily basis a profound pain in the ass: an exercise in boredom.

But Friday’s announcement of the Leaving Certificate cancellation marked yet another indelible stain caused by this virus. For the class of 2020, this runs deeper than the sitting of those examinations. It stands as the admission of a false ending to their entire secondary school lives. It may be nobody’s fault. And there may be no alternative. But it doesn’t mean that the predicament in which Ireland’s class of 2020 has been placed is not, for them, a tragedy.

When How To Cheat In The Leaving Cert was released, it caused a minor rumpus, with politicians of the day fretting that it might lead young minds astray and tempt others to come up with their own schemes. It’s a thought that has probably crossed the minds of many kids. Could you? How would you? Would you have the stones? And what if you were caught?

The eve of Leaving Cert has always felt like a definitive time in the Irish calendar season. Nothing can be reversed. The weather tends to be cruelly gorgeous. In households with Leaving Cert’ students, the nerves are comparable to taking part in a big sports event.

And that’s because the Leaving Cert has always been presented as a kind of game. It is a competition as real and intense as any of those sports competitions – the cups, the leagues, the All-Ireland chases – which set the rhythm of the school seasons. When you are Leaving Cert you are competing against yourself – your willingness to study night after night, to memorise and stick with the tedious slog; with one another; with the examination system and with those among the 60,000 others who may want to do the same college course as you do.

The Leaving Cert exams also bring to a natural end the five or six years that students spend in their schools. The basic purpose of school is the three-week cross-country course through Maths and English and all the rest followed by the third-level offers and the rush to the next part of life. But it’s rarely, if ever, the actual exam halls that people remember when they think about school. It’s the usual stuff – friendships, enmities, the tedium, whether you hated or liked it and most of all the feeling of those purgatorial afternoons: that you would never be out of the place until the day came when you put the pen down after that last Leaving Cert paper and walked out the gate – never to set foot in it again. There’s a kind of completion in that alone which the class of 2020 had no idea they would not experience when the school year was abruptly halted at the outset of the quarantine period.

And there has always been more to school than just the dry procedure of mugging up for those June exams. The school serves as the framework which students use to construct their worlds. It doesn’t matter if getting out of there as fast as possible is the motivation. Those buildings and teachers serve as reference points and as voices of influence at a time in young people’s lives when they are sharp and alive to everything they see and hear. And it’s that stuff that stays long after the details of the examination papers have been forgotten.

The class of 2020 had spent a year and a half preparing for what was to have been the biggest competition of their lives to date. The only rules were that they be ready come June 7th – and, of course, that they didn’t cheat in the Leaving Cert.

This weekend they are in limbo. And because they are young and resilient and bright, the tens of thousands will go on and find a way through and ultimately help the battered country through its latest setback. And one day they might even forget that they are distinguished by the weird fact that they didn’t sit the Leaving Cert.

But they won’t forget that they didn’t get to leave school.

1 Manny Pacquiao’s office confirms Conor McGregor fight
2 Tour de France: Every yellow jersey winner must feel guilty by some association
3 Kevin Babington: Learning to live again after life changed forever on Long Island
4 Matt Williams: The sky is not falling in on Irish rugby - but Ireland do need a new plan
5 Can Thiago bring the right dynamics to save Liverpool from entropy?
Real news has value SUBSCRIBE