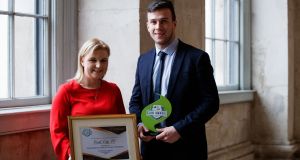 Dubliner Lisa Fallon has been appointed manager of London City Lionesses in the Women’s Super League 2.

Fallon, who holds a Uefa Pro Licence, has previously been in roles at Cork City, Northern Ireland and with Jim Gavin’s Dublin team during their five All-Ireland wins.

She was most recently part of the coaching staff at Chelsea and will now take on the top job at the second tier side who were fourth in the division before it was cancelled due to the Covid-19 pandemic.

Fallon described the move as a “seminal moment” in a career which has gone from strength to strength after she previously became the first woman coach to work in men’s football in Ireland when she took on her role at Cork.

“This is a seminal moment in my career and an extremely proud day for me and everyone who has helped me through my career to-date,” she said.

“I would like to thank Diane and the Board for giving me this opportunity.

“I was drawn to the ambition of the club and Board – together I am sure that we will take this club forward. The squad is exciting with lots of potential and we are all looking forward to getting back out on the grass and back to training.

“Finally, and most importantly, I would like to talk directly to the supporters – we’ll be a hard-working, attacking team that will continue to make you proud.”