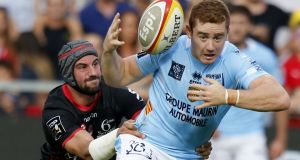 Paddy Jackson in action for Perpignan against Lyon in a French Top 14 clash at the Aimé Giral Stadium in Perpignan, southern France. Photograph: Raymond Roig/AFP/Getty Images

The decision by Diageo to cut its 30 years of sponsorship with London Irish because the rugby club had signed Paddy Jackson reignites a debate that will not go away for as long as the former Ireland international is still kicking a rugby ball.

And it revives the painful and polarising debates that gripped Ireland during and after the ‘Belfast rape trial’ in which Jackson was one of four defendants found not guilty after a highly publicised hearing.

London Irish announced that it had agreed terms with Jackson on May 7th. On Thursday, June 13th, Diageo released a statement describing London Irish’s decision as “not consistent with our values so we have decided to end our sponsorship”.

The news provoked reactions both lauding and criticising the decision. Even from a distance, it is easy to understand the dilemma those within Diageo faced. If they stood idly by, then what kind of message were they delivering to their many employees and customers?

Against that, what gave a drinks company the right to cast judgment over an individual who had been named even before legal proceedings were initiated and who lost his IRFU contract even though he had been cleared of all charges?

To some, it was the right call. To others, Diageo’s position stinks of hypocrisy or a cynical reading of the public mood. Both sides can and will argue their case with equal conviction and passion.

But what has changed? After the outrage and the heightened emotions, after the details of the case begin to fade; after Paddy Jackson’s rugby career ends and he, too, fades into everyday obscurity, will anything have substantially changed? Has anything been learned?

The details of that rape case forced everyone in Ireland to stop and examine and – for the first time – to articulate the attitudes of its young men towards young women and, more troublingly, to bear witness to what happens to a woman who submits herself to the legal system after making a report of rape.

Outside of pockets of social media, the young woman in question remained anonymous. Because of that, it was easy to see her as your sister, your daughter, your friend. As you. As the nine-week trial deepened, it was impossible not to see the woman as a lone figure up against the apparatus of the legal system and up also against rugby culture and its perceived associations with privilege and entitlement.

The details of the night in question were scrutinised in excruciating intimate detail. At one stage, her undergarment, bloodied, was passed around the public court room. In a legal sense, it was evidence. In a personal sense, the moment can only have been devastating.

It emerged that she had stated those very reservations to friends before going to the police. The cold statistical chances of a conviction were stacked against her.

As the writer Susan McKay put it in a Guardian review of the case, during the Troubles, Northern Ireland was “an armed patriarchy”. Victims of rape and of domestic violence suffered silently.

Out of the 823 rapes reported in Northern Ireland between 2016-2017, just 15 ended with guilty verdicts. None of those had anything like the public attention of this trial. By the end, the woman’s misgivings seemed well placed. The trial lasted nine weeks. Not guilty verdicts for all defendants were returned by the jury in just four hours. The verdict brought both vindication and outrage and the slogan #Ibelieveher.

In the aftermath, the private messages exchanged between the four defendants provoked much outrage; they were derogatory in the extreme, belittling, contemptuous. What were intended as a private gleeful boast-fest of sexual prowess became, in the public domain, shockingly hurtful and misogynistic. They made the men in question look pathetic.

Those messages raised a separate debate which was revived on BBC radio’s The Nolan Show on Friday morning. Were those messages, wondered the host, misguided bravado between the men which nobody was ever supposed to see or a genuine reflection of their attitudes to women?

Were they also, then, a reflection of how many young men spoke privately about women? People called in to the show to agree, to disagree, to protest that women often spoke and behaved in derogatory ways towards men . . . and on and on.

Immediately after the trial, one of the defendants, Stuart Olding, offered what appeared to be a genuine apology. Jackson decided against that. One of the new aspects of the case was that it was debated hugely on social media.

Ironically, some of the people appalled by what Jackson was accused of and by the content of those private messages expressed their views towards him with words which were also troubling.

Those outraged on Jackson’s behalf pointed out that he had been found guilty of nothing. He would probably never play for Ireland again, he has had his name vilified. He left to play rugby in France and gradually, the debate subsided – until now.

It seems fair to assume the Diageo decision stems from the genuine moral conviction of those tasked with making it. But it is ridiculous, too, to ignore the truth that alcohol is the common theme is so many of Ireland’s darker stories – the street violence, the domestic violence, the broken lives of addicts, the serious health implications.

Alcohol is a drug. For those who can control it, drinking alcohol can mean great fun and, at worst, a muzzy head and the urgent need for greasy food. The HSE ‘ask about alcohol’ web page describes alcohol as a ‘depressant’ and a ‘psychoactive drug’ while acknowledging that it is culturally central to the way of life in Ireland.

One of the sub-themes of the Belfast case concerned the staggering volume of alcohol consumed by the defendants on the night in question. That does not, of course, constitute any kind of an excuse or rationale for the allegations for which they stood trial.

But it leaves Diageo open to the criticism that a drinks company has no place in offering moral perspective through its commercial sponsorships. And it also places a spotlight once again on the uneasy relationship between drinks sponsorships in sport; to some, those associations will never sit right.

In 2015, Diageo sponsored a campaign against alcohol abuse that drew instant complaint from the Rape Crisis Network of Ireland (RCNI). The image showed a young woman sitting in her bedroom, after a night out. Her make-up is smeared, one eye bruised and swollen. Her sibling is standing in the doorway, concerned. The slogan reads: ‘Who’s following in your footsteps: Out-of-control drinking has consequences’.

Understandably, the RCNI interpreted the message as implicitly placing the blame on the victims of assault or sex crimes and branded the advert as “sinister and regressive”. At best, it was a confusing attempt to acknowledge something that even a company with a genius tradition in advertising could not articulate with any real clarity.

The Belfast case raised ongoing questions about how men behave towards women in thought, in word and in action; questions over whether those messages were indicative of an appalling culture and if so, what could be done to educate young men in order to break that pattern; questions over sexual assault and the justice systems, questions over the education of what constitutes consent. It resulted in a thousand answers but no clear national plan of response.

The only thing that can be said with any certainty is that the young people at the heart of the Belfast case must wish constantly they could have that night back.

Time ticks on. The new rugby season will fire up in the autumn and the aftermath will continue to follow Paddy Jackson. One can only hope that the poise and moral courage of the woman on the stand has helped her to resume her life. That trial has ended. But the uncomfortable questions and issues with which it confronted Irish society – North and South – remain urgent and, once again, largely left ignored and unspoken.