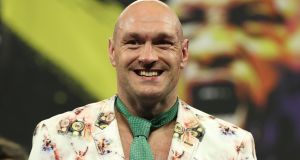 In the summer of 2013, I spent an enjoyable afternoon in the company of Matthew Macklin at a small gym near Wall Street. He gave an open session and interview in the build-up to his fight against the silky and frighteningly powerful Gennady Golovkin. Macklin was pleasant and honest and interesting and faced a daunting challenge. The fight, in Foxwoods Casino, didn’t go well: Golovkin caught Macklin with a sickeningly true body shot to the liver in the third round which required a trip to the hospital.

During the same summer I spent an hour with Tyson Fury who was in Manhattan road-testing the combination of articulate charm, provocative eccentricity and boxing craftsmanship with which he would go on to transform his gargantuan, unwieldy frame into the role of jester-king of heavyweight boxing. What stood out about both those events was how low-key the promotions were. Fury had an entourage with him but as he ambled back to the Hotel Pennsylvania, nobody on the street knew who he was.

Macklin went on to found Macklin’s Gym Marbella (MGM) in association with Daniel Kinahan, an enterprise which grew into a boxing management stable and later evolved into MTK Global promotions. It is just over four years since MGM showcased the Clash of the Clans fight event in the Regency hotel, the weigh-in ending abruptly with a shooting spree by assailants disguised as gardaí and wielding AK47s. One man was killed.

The shooting was the latest episode in the Kinahan-Hutch gangland feud. Daniel Kinahan was thought to have been the main target. He survived but the shooting derailed his immediate ambitions to become a leading boxing promoter.

On Thursday, Sandra Vaughan, the chief executive of MTK Global, gave a rare media interview to a channel associated with the company. She reiterated that she had bought the company from Kinahan, whom she has known for over 20 years and that he has absolutely no role in the company. In the meantime, both parties have gone from strength to strength.

MTK now provides official management to over 300 boxers, including Tyson Fury, Carl Frampton and Michael Conlan. Kinahan’s skills as a promoter have recently been anointed by Bob Arum, the veteran events guy who has been dealing in the sport since Ali was young. Within the past few days, Kinahan has taken a role as adviser to the Prince of Bahrain who backs an MMA events company. There has been speculation that Kinahan might well be the figure to facilitate the eagerly awaited return fight between Fury and Anthony Joshua in the Middle East, an event which would command huge sums of money.

It would seem as if the disparity between Daniel Kinahan’s domestic and international reputation could not be greater, something that Vaughan addressed over the course of a precisely-questioned interview which went on for half an hour.

“They are going to have to at some point acknowledge the fact that, as I say whether they like it or not, people like Bob Arum, the Prince of Bahrain, Frank [Warren], Eddie [Hearn] . . . all of these big fights will happen because of Daniel Kinahan. That is fact. The other part is fiction. I don’t know whether it is the Irish mentality but at some point, would you not be proud that someone from inner-city Dublin is actually sitting at the table with that level of organisation – with the Prince of Bahrain or Bob Arum, making history, making fights? For Ireland, would you not be proud of that; would you not be proud that someone has got out of that inner-city life and made a huge success?”

There is no doubt that on the surface, Kinahan’s rise in profile and power has a glittery surface of fabulousness: an inner-city Dublin kid who rose to consort with sheikhs and old-world gods of boxing. Vaughan made it clear that while Kinahan was not involved in MTK, he was acting as “an adviser” to several of the company’s boxers. They are independent people: whom they chose as advisers was their own business.

Boxers like Conlan and Frampton are smart people and are experienced operators and were clearly morally comfortable in their decision to sign with MTK management. Arum has this week offered sparkling bona fides for Kinahan’s business acumen and persona. He also said he didn’t much know or care about Kinahan’s family background. “Mind your business, son,” was his advice to himself. So on the face of it. Sandra Vaughan is correct. Whether anyone likes it or not, Kinahan seems to have parlayed his involvement in a fledgling boxing company into a powerful role as a puppet master in upcoming world title fights in just seven short years. It is a staggering story of self-invention.

How that has been achieved would make a fascinating story. But as of yet Kinahan has not been a front of house figure. If he is to follow Bob Arum and company, it is going to difficult to see how he can avoid the microphones and cameras.

In late April, gardaí made three arrests when intercepting a cocaine seizure valued at €2.5 million which they believed had been imported across the Border by the Kinahan cartel. On Monday, the Special Criminal Court heard evidence during the attempted murder trial of Patrick ‘Patsy’ Hutch heard from evidence from Detective Inspector Dave Gallagher that the Kinahan gang was a criminal organisation involved in murderous feuds, drug and firearms trafficking

Daniel Kinahan lives in Dubai. He has no criminal record. He can claim that none of this has anything to do with him. For a boxing adviser and promoter, he is unique in that he says almost nothing in public. You to have to imagine that staging big fight nights in dear old Dublin would be a closely held ambition. MGM didn’t attempt to stage any event in the city since the Regency horror show. Last year, MTK planned events starring Fury in the Cork Opera House and the Helix were cancelled when graffiti threatening more violence was discovered outside the Dublin venue. The credibility level was considered low. But who would take the chance of another blast of machine gun fire with big Tyson on stage regaling the masses? Nobody. And any fight even in the city requires a garda license.

That is not going to happen after the Regency murder.

Fight fans don’t care who behind the scenes makes the big events happen. The lucky few are in the arena: the rest of the world makes do with a slab of beer and pay per view. Fighters, too, don’t much care about the backgrounds or life stories of the shakers and makers who get them together in the ring. They just want to get paid. And right now the world has far, far greater cares than whether the next big heavyweight fight has as its off-stage player some guy with family links to the Irish criminal underworld.

There remains an interesting angle in Vaughan’s depiction of boxing’s new kingmaker as an Irish story to be celebrated. But not when 18 people have lost their lives in a feud between two families. When you can’t run a fight event in Dublin without the threat of gunfire and death, it’s impossible to see all of this as anything other than a bleak reflection on a venerable Irish sporting tradition.