A kick in the teeth for sports, and a nail in the coffin for communities

There’s to be no return of crowds this year – will there be any local sport in UK next year? 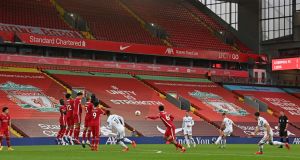 Leeds United in action against Liverpool at Anfield on September 12th. ‘The prime minister seems to think that we’re all okay if the Premier League is still happening.’ Photograph: Paul Ellis/AFP via Getty Images

After a kick in the teeth, a kiss of life? Sports bodies in the UK were left blindsided and woozy by the announcement on Tuesday that the return of crowds to stadiums would not only be “paused” but could be delayed until April 1st. Then came a sliver of hope with the news that up to eight elite sports are now likely to be helped by a rescue package. The question now is, how deep are the British government’s pockets – and will the money really be enough?

Make no mistake: this is a crisis so menacing it should come accompanied by the soundtrack to Jaws. How can it not be when the Premier League is warning that football is losing £100 million a month? Or when RFU chief executive Bill Sweeney, a man not prone to hyperbole and flights of fancy, says that rugby clubs at the heart of communities across England are “in danger of disappearing forever”. Racing, cricket, golf: they are all saying the same thing. The pips have already been squeezed. Even the plinth is dry.

In July, the government came up with a £1.57 billion package to save the arts. I am told that sport will not get anywhere near that level of help – a better indication of what to expect is provided by the £16 million in aid it gave to rugby league over the summer. We are talking millions not billions – a lifeline to save the majority of clubs from the breadline. Nothing more.

But there is anger within some sports too. Many have jumped through every hoop to make their stadiums safe. Yet they have been defeated by a resurgent virus – not helped by the government’s inability to track and trace effectively.

Sports bodies know there is no way that they can allow fans into stadiums when the entire country is being told to batten down the hatches.

However, privately they are far from convinced that a safe and socially distanced return of fans would increase transmission. After all, across the continent fans are returning. The Netherlands, for instance, had more than 60,000 inside grounds in the top two divisions last weekend – even though positive tests are more than double those of the UK once you account for population.

Brighton is one club that has said it can demonstrate fans are safer in stadiums than they are in pubs. However, Michael Gove clearly disagrees, saying that “mingling” by supporters could lead to a resurgence in cases.

Of course there is a risk when fans congregate in pubs before games and travel to matches together. However, Botan Osman, the chief executive of Restrata, which has provided Covid-safe technology to monitor spectators during the cricket season in England as well as the current Indian Premier League, said  it was possible to make grounds secure.

Osman said that at Surrey and England matches, everyone in the stadium was given a small device when they entered – which meant they could be tracked in real time using Bluetooth technology to ensure adequate social distancing.

“The technology exists, so if two people who are not in the same bubble come within two metres of each other in a stadium, we know right away and they can be alerted,” he added.

“Similarly, if it appears that there are more people in a concourse of a football ground than you would like, the remainder of the spectators and stewards can be made aware. Using such technology to monitor and manage fans would give sport more of a fighting chance.”

Meanwhile, it is not just elite sport that is facing a massively uncertain future. It is understood that a proposed £500 million plan to help rescue grassroots leisure facilities is still waiting approval, with the treasury said to be sceptical.

But without a bailout, the industry groups UK Active and Community Leisure UK are warning that about 20 per cent of the UK’s swimming pools could also close for good – along with hundreds of leisure centres run by local authorities.

Already, about around a third of them have not opened since lockdown was eased. And there are the knock-on effects here. Many of the facilities under the greatest threat are in the most deprived areas of the UK.

Not only are thousands of jobs at risk, but it makes it hard for people of all ages to get active.

An investment now would surely pay off in the future – especially when we know the massive savings to the NHS from a healthy population.

That was part of the message that the Premier League, RFU and more than 100 national and grassroots governing bodies sent to the British government in pleading for more support. In a letter to Boris Johnson, they warned him to ring-fence funding for the recovery of the sports and activity sector , or risk fuelling physical inactivity and related illnesses for a generation.

There is a sense among many in sport that the prime minister is only half listening. As the executive of one sport put it: “Really challenging times for sport. The prime minister seems to think that we’re all okay if the Premier League is still happening.”

1 Gerry Thornley: After 32 weeks the Six Nations is back up for grabs
2 Stockdale and Ringrose on board with expansive Irish game plan
3 Slaven Bilic hits out at €16.95 pay-per-view for West Brom’s draw with Burnley
4 Bennett girding his loins for impossibly unpredictable Vuelta
5 GAA expected to go ahead with championship under Level 5
Real news has value SUBSCRIBE
Here is your handy guide to sport on television this week