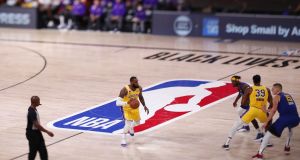 The day after shocking the world by defeating the heavily favored Sonny Liston for the heavyweight championship in 1964, the man then known as Cassius Clay shocked the world again when he announced that he was abandoning his “slave name”, joining the Nation Of Islam, and would from that day forward only answer to, or acknowledge the name, Muhammad Ali.

And on that day, he became more than an athlete.

He abandoned the previously accepted role for Black athletes which was to entertain the white masses with their athletic prowess, be grateful for the benefits, and remain silent on anything outside of sports.

Ali was the opposite of that. He called out racism, challenged oppression, demanded respect as a human being, was mentored by Malcolm X, and embraced his status as a social critic. And much of white America despised him for it. They appreciated his talent, hated his politics, and wanted to do everything in their power to silence him.

In that sense, LeBron James has become this generation’s Muhammad Ali.

Enter Colby Covington. This past weekend, the UFC fighter dedicated his victory over Tyron Woodley to “all the first responders, all the military out there” before directing his comments to James.

The Trump supporter then turned his attention to the upcoming elections for good measure. “Ladies and gentlemen, the silent majority is ready to make some noise,” Covington said while draped in an American flag. “If you thought that was a beating, wait until November 3rd when Donald Trump gets his hands on Sleepy Joe [BIDEN]. That’s going to be a landslide.”

You may ask why a UFC fighter was focused on a basketball player after his moment of victory. It’s the same reason why Muhammad Ali’s name was brought up so many times and with the same vitriol when he was calling out racism in the 1960s. Because athletes with the influence of James and Ali pose an immediate threat to those who opposed him.

Oddly for a man who doesn’t like James acting “woke” and failing to stick to sports, Covington soon entwined himself even further into politics. In what appeared to be a scripted and poorly acted moment, he was interrupted during his press conference by a call from Trump. “Oh the president is calling me,” said Covington. Needless to say, his acting skills could use a little more work, but he and Trump chatted on speakerphone, with the president telling Covington: “You are something ... I appreciated the shout-out tonight, too. I’m your fan, you’re my fan. Two of a kind, two of a kind.”

And Trump, of course, is the man who rallied his base against Colin Kaepernick and called NFL players who peacefully protest the wave of killings of unarmed Black men and women by police “sons of bitches”. The same man who tweeted that players who earn “millions” should not be allowed to show “disrespect” (he did not specify disrespect to what, but this is not someone who cares about details). And, yes, the same person who publicly called James dumb for saying something he didn’t like. “Lebron James was just interviewed by the dumbest man on television, Don Lemon. He made Lebron look smart, which isn’t easy to do,” he tweeted in August 2018.

So it’s not that Trump doesn’t like politics in sports, it’s just that, hypocrite that he is, he only wants politics in sports when it suits him (oddly, Trump had no problem with Ali, once calling him a “friend” although it does not appear the feeling was reciprocated).

With adversaries as morally dubious as Covington and Trump, James shouldn’t worry about being attacked for his views as Ali was attacked by his critics in the 1960s. We all know how politicians came to see him in the end: 40 years after being attacked as a traitor, he was awarded the presidential medal of freedom. - Guardian

Etan Thomas played in the NBA from 2001 through 2011. He is a published poet, activist and motivational speaker

Man United and Chelsea play out drab draw in the driving rain 19:54
Antrim too good for Waterford in league clash in Dundalk 19:09
Jim Bolger enjoys a fine day on both sides of the Irish Sea 19:07
Championship: Browne and McClean on scoresheet as Idah sees red 19:04
Wicklow edge Division Four winner takes all clash with Wicklow 18:59
Here is your handy guide to sport on television this week