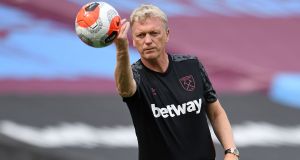 Coronavirus chaos hit the Carabao Cup with West Ham boss David Moyes and two players sent home prior to their win over Hull, while Leyton Orient’s clash with Tottenham was called off.

Ireland international midfielder Josh Cullen and defender Issa Diop were initially named in the team to face the Tigers but 15 minutes later the pair were omitted and there was no sign of Moyes on the bench.

The third-round tie went ahead as scheduled with Sebastien Haller and Andriy Yarmolenko both scoring twice in a 5-1 win, with Robert Snodgrass also on target while Mallik Wilks grabbed a consolation for the visitors.

Earlier on Tuesday, Orient’s game against Tottenham did not go ahead after the League Two club returned a number of positive tests, with the EFL yet to confirm if Spurs will advance as per competition rules.

Manchester United struggled to work off the hangover from their weekend loss to Crystal Palace as they beat Luton 3-0 at Kenilworth Road.

Juan Mata’s penalty gave United a fortunate half-time lead and after Luton’s Tom Lockyer had an effort cleared off the line, two goals in the last two minutes from substitutes Marcus Rashford and Mason Greenwood put some gloss on the scoreline that United’s performance barely deserved.

Premier League West Brom were dumped out by Brentford whose goalkeeper David Raya was the hero in a penalty shoot-out at The Hawthorns.

Baggies skipper Hal Robson-Kanu struck twice from the spot in the second half either side of a brilliant overhead kick from Emiliano Marcondes, then Marcus Forss scored his own penalty to force the shoot-out.

Raya saved Grady Diangana’s penalty as the visitors held their nerve to progress 5-4 on spot-kicks.

Newport reached the fourth round for the first time in their history with a 3-1 win over Watford at Rodney Parade.

Tristan Abrahams put Newport ahead from the spot and captain Joss Labadie doubled the home side’s lead with a volley just before the half-hour mark.

Adalberto Penaranda reduced the deficit from the spot but Irish striker Pádraig Amond pounced on a defensive error in the 65th minute to make the game safe, before Watford had Stipe Perica sent off late on.