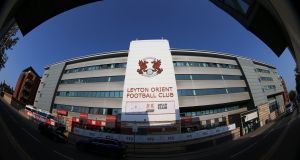 Tottenham’s Carabao Cup tie away to Leyton Orient has been called off. Photograph: Nigel French/AFP via Getty Images

Tottenham’s Carabao Cup tie at Leyton Orient has been called off but a decision delayed on whether to award the Premier League club a walkover after the majority of Orient’s first-team squad tested positive for Covid-19.

Orient announced on Monday that they had closed their stadium and training ground until further notice and it has been confirmed the tie will not go ahead as planned on Tuesday evening.

Both clubs, the EFL, Public Health England and the director for public health in Waltham Forest, the local authority, were involved in discussions which led to the decision.

Under Carabao Cup rules Orient should forfeit the match and Spurs advance to the fourth round to host Chelsea or Barnsley; that rule was brought in this season with coronavirus in mind. But Orient have argued that they should be given the chance to reschedule the game, although the fourth-round ties are due to take place next week.

“Discussions are ongoing between the relevant stakeholders in regards to the implications of the decision not to play tonight’s game and a further update will be provided in due course,” the EFL said.

“Leyton Orient, the EFL and the relevant authorities are conducting a thorough review of the club’s Covid-19 secure procedures with the view to reopening the stadium and training ground as soon as possible.”

The EFL is regularly reviewing its regulations and protocols but some clubs, including Stevenage of League Two, are considering returning to weekly testing in the wake of Orient’s positive tests. Tottenham paid about £5,000 for the round of tests.

“We are having to look at it again,” said the Stevenage chairman, Phil Wallace. “The only reason we are talking about Orient is that to play the Spurs game they had to have the tests. I don’t know what would happen now if you went round all the EFL clubs and had the tests. Maybe something similar.” – Guardian

Bernard Le Roux cleared to face Ireland on Saturday after disciplinary hearing 15:55
Johnny Sexton: ‘We just know we have to be a lot better in all areas on Saturday’ 15:43
Harrington keen on breaking her Breeders’ Cup duck at Keeneland 15:16
Neil Lennon brands criticism of Shane Duffy’s Celtic performances ‘hysterical’ 14:58
19 Premier League clubs sign up for new FA diversity code 13:52

1 Gerry Thornley: Antoine Dupont and France look perfectly primed for Ireland visit
2 Johnny Sexton: ‘We just know we have to be a lot better in all areas on Saturday’
3 Ireland's centre will hold thanks to Henshaw and Aki’s midfield muscle memory
4 Seán O’Brien: Anger over my parents’ break-up never left me
5 Rory McIlroy’s sole focus is on Masters and another Grand Slam opportunity
Real news has value SUBSCRIBE