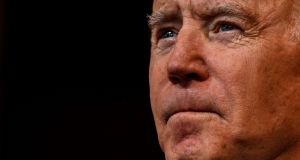 The election of Joe Biden has come as an enormous relief to mainstream political parties in the democratic world as it shows that xenophobic populists can be defeated by a moderate, old-school democratic politician. It is a particular bonus for Ireland because the new US president is more closely attached to this country than any of his predecessors in the White House.

That attachment was evident in his warnings to the UK, before and after his election, not to breach the terms of the Belfast Agreement in the course of the Brexit process. Crucially Biden has a real understanding of this country and does not pander to cliched demands for a united Ireland parroted by some US politicians. Instead he is committed to the shared island approach being followed by Taoiseach Micheál Martin.

7 I got rid of 95% of my stuff, almost everything I’ve ever owned

10 How did a remote Mayo town become Ireland’s most Covid-infected place?

11 Covid-19: How to look after yourself if you catch the virus

13 Traveller who tried to book hotel wedding awarded €15,000 for discrimination

14 Una Mullally: Government is failing when it comes to leading us through this pandemic

17 Oscar Wilde, my grandfather, ‘talked himself into prison’

19 Emma de Souza: My generation deserves to have its say on Irish unity now

20 Colum Eastwood: Seamus Mallon’s offer is still on the table if unionism is interested

28 The chickpea stew that broke the internet in the US is here. Give it a go

30 Special needs school closures: ‘I thought they thought more of my child’

32 Garda trauma: Sean was a garda for six weeks when he saw his first body

35 Covid-19: How are other EU countries dealing with schools?

38 A referendum on Irish unity is coming, whether we like it or not