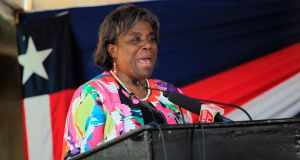 Linda Thomas-Greenfield has been proposed as the new US ambassador to the United Nations. Photograph: Ahmed Jallanzo/EPA

President-elect Joe Biden pushed ahead with preparations for his incoming presidency as he unveiled his foreign policy and national security team on Monday.

In addition, the former vice-president has nominated the first female candidate to head the US intelligence services, Avril Haines. Lawyer and long-term government official Alejandro Mayorkas will be the first Latino to lead the Department of Homeland Security, the agency responsible for immigration matters.

Former secretary of state John Kerry has been named as the administration’s climate envoy – an indication of the priority Mr Biden will give to climate change during his presidency. This will be the first time a climate change envoy will sit on the National Security Council. Mr Kerry posted on Twitter on Monday that the US would “soon have a government that treats the climate crisis as the urgent national security threat it is”. Mr Biden is expected to rejoin the Paris climate agreement in the early days of his presidency.

Though not confirmed, it has been widely reported that Janet Yellen, the former head of the Federal Reserve, will be the new treasury secretary – the first woman to lead the agency in its 231-year history.

Head of the table

Announcing the foreign policy and national security nominees – who will be formally unveiled at a transition event in Delaware on Tuesday – Mr Biden said he needed a team “ready on day one to help me reclaim America’s seat at the head of the table”.

“These individuals are equally as experienced and crisis-tested as they are innovative and imaginative. Their accomplishments in diplomacy are unmatched, but they also reflect the idea that we cannot meet the profound challenges of this new moment with old thinking and unchanged habits – or without diversity of background and perspective. It’s why I’ve selected them.”

Though Mr Biden’s team of officials – many of whom will need to be confirmed by the Senate – is one of the most diverse in terms of gender and ethnicity, the appointments also mark a return to the politics of the Obama administration. The appointment of Mr Kerry in particular, though rumoured, took some analysts by surprise, though the former secretary of state and presidential candidate was an early supporter of Mr Biden’s candidacy, campaigning for him in Iowa and elsewhere.

Other high-profile cabinet positions that have yet to be filled include the role of defense secretary, with former Clinton and Obama administration official Michèle Flournoy believed to be in the running.

The announcement of some of the most senior members of Mr Biden’s team is taking place earlier than usual in the transition cycle, suggesting that the president-elect is seeking to emphasise that he is moving ahead with the transition, despite outgoing president Donald Trump refusing to accept the outcome of the election.

The General Services Administration has refused to accept Mr Biden’s election victory, denying his team access to resources and information ahead of inauguration day on January 20th. While GSA head Emily Murphy confirmed that her deputy would brief members of Congress on the matter next week, Democrats insisted that Ms Murphy herself should update Congress this week on the delay.

Meanwhile, the Michigan board of canvassers voted to certify the state’s election results yesterday – the latest blow to Mr Trump, who has challenged the outcome of the presidential election in various states. The outgoing president had hoped to sway the Republican members of the board to declare him the victor in Michigan, despite Mr Biden winning the state by about 155,000 votes.