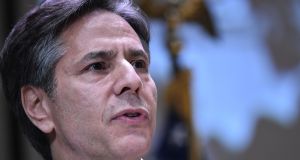 US president-elect Joe Biden plans to nominate veteran diplomat Antony Blinken as his secretary of state, a decision likely to signal a return to multilateralism after Donald Trump’s shunning of traditional allies, US media reported. Photograph: Mandel Ngan/AFP via Getty Images

The problem was never “America First”. No national leader could ever countenance – or admit to – a foreign strategy that did not put the national interest at its heart. But Donald Trump’s slogan is in reality “America Alone”, an insistence above all that in an interdependent, globalised world one can go it alone, the blinkered delusion that muscle, whether economic or military, suffices to assert one’s interests. That friends don’t matter. A repudiation of both multilateralism and the truth that compromise is not a zero-sum game.

President-elect Joe Biden’s willingness to nominate his closest foreign policy adviser, Antony Blinken, as secretary of state is a clear repudiation of that doctrine and will come as intense relief to friends around the world. Blinken, who has served at Biden’s side for 20 years in both the Senate and then through the Obama years in the White House, has a strong commitment to international co-operation and is certain to prioritise the most welcome recommitment of the US to global agreements and institutions, from the Paris climate accord, to the Iran nuclear deal, the World Health Organisation, Nato, and the UN.

Inside Politics · Trump, Biden and American foreign policy in a changed world - with John Mearsheimer

Repairing frayed relations with the EU will be high on the agenda for a Europhile educated in Paris who has expressed strong scepticism about Brexit. In a recent podcast Blinken spoke of rebuilding alliances to tackle the “democratic recession” enabled by Trump that let “autocracies from Russia to China. exploit our difficulties”.

“Simply put, the big problems that we face as a country and as a planet, whether it’s climate change, whether it’s a pandemic, whether it’s the spread of bad weapons ... none of these have unilateral solutions,” he told a conference in July. “Even a country as powerful as the US can’t handle them alone.” Blinken has been described as a low-key, pragmatic realist and a strong proponent of using US power for good and advocating for human rights.