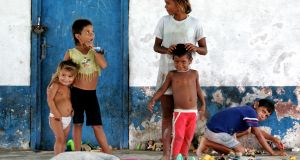 Thirty-one years ago this month, the United Nations General Assembly adopted the Convention on the Rights of the Child. A core international human rights treaty, it set key standards for children’s rights and how governments must work to vindicate them.

Ratified by Ireland and more than 120 countries, signatory states are bound by the obligations within the treaty and compliance is assessed by the UN Committee on the Rights of the Child every five years.

In a landmark decision earlier this month, the committee confirmed that their current review of Ireland will, for the first time, consider the country’s role in facilitating tax avoidance and whether it undermines the ability of developing countries to raise revenue and guarantee the rights of children.

The committee, which is composed of a number of independent children’s rights specialists, reached their decision to include taxation as an issue having considered submissions made by civil society groups and academics - including from a coalition of Irish and international NGOs, including Christian Aid.

While recommendations from the committee are non-binding, politically they could see Ireland forced to adopt a more holistic approach to developing tax policy- including consideration of its human rights implications.

The decision also has the potential to change the way tax competition between countries is assessed.

While the EU has already made the case that Ireland’s aggressive tax policies are undermining competition and the EU Single Market, the UN will now examine its human rights implications, acknowledging that the impact of tax policy is not limited to national borders but has far wider impact.

Politically, this is an important shift, echoing what development organisations and experts have been saying for decades. Under international law, Ireland is already obliged to ensure it avoids actions that may foreseeably and negatively impact another country’s ability to honour its human rights obligations, but in terms of tax policy, this has largely been ignored.

Previous Christian Aid research has shown that Irish tax practices can be deeply damaging for developing countries and undermine a fundamental human rights principle, that of international cooperation.

For example, in 2018 Ireland signed a new tax treaty with Ghana, going against the advice of the Department of Foreign Affairs that the effect of such treaties is that capital flows from developing to developed nations.

Documents released under Freedom of Information showed that Ireland then aggressively negotiated a halving of the withholding tax rate that Ghana could apply on royalties to Ireland. As Ireland is Ghana’s largest source of foreign investment, this greatly undermines Ghana’s ability to generate resources to pay for essential services, like healthcare and education.

On completion of the negotiations, the relevant government minister was forced to apologise for misleading the Dail, having claimed that Ghana had approached Ireland seeking a treaty, when in fact the opposite was true. This is a process likely to be repeated, as Ireland expands its network of tax treaties with a specific focus on low and middle-income countries.

The research also showed that Ireland’s extremely generous tax breaks afforded to companies onshoring intellectual property is starting to impact on African and Latin American countries. In 2016, for the first time, figures from the Central Statistics Office showed significant amounts of Intellectual Property-derived revenue flowing from those countries into Ireland.

These tax breaks have played a role in attracting multinationals into Ireland and the tax they have contributed has been an important component of the Irish government’s ability to respond to the coronavirus pandemic. But we cannot ignore the reality that some of this revenue originates in countries who have much weaker healthcare systems and resources to deal with the virus than we do.

These are the issues that will be examined by the UN when the Irish government travels to Geneva next year to defend its position.

How can Ireland reconcile its role in facilitating tax avoidance, with our commendable history of aid, and indeed with our human rights obligations - particularly at a time when we sit on the UN Security Council?

By examining the human rights impact of Ireland’s tax policies on children in developing countries, the committee will help clarify a key principle, long emphasised by those at the sharp end of tax avoidance: that a narrow focus on investment is only half the picture. Justice demands a reorientation of tax policy that puts principles of international cooperation, equality and human rights - including those of children - at its core.