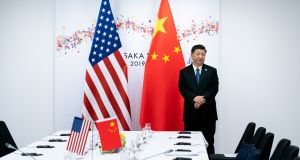 China’s president Xi Jinping has publicly congratulated Joe Biden on being elected US president, leaving Russia’s Vladimir Putin among a handful of world leaders who have not yet acknowledged the former vice-president’s win.

“Xi said he hopes that the two sides will uphold the spirit of non-conflict, non-confrontation, mutual respect and win-win co-operation,” according to a statement from the Chinese embassy in Washington on Wednesday.

The statement added that Mr Xi hoped the two sides would “focus on co-operation, manage differences, advance the healthy and stable development of China-US ties, and join hands with other countries and the international community to promote the noble cause of world peace and development”.

“We appreciate the congratulations from all world leaders who have conveyed them, including President Xi,” a Biden transition official said.

While such notes are generally part of normal diplomatic protocols, President Donald Trump has yet to concede the election, and Mr Xi has delayed offering his personal congratulations to the president-elect.

The Chinese government formally congratulated Mr Biden on November 13th, almost a week after he was widely recognised as the winner of the November 3rd presidential election.

A Chinese foreign ministry spokesman said at the time that Beijing “respected the choice of the American people” and extended its congratulations to Mr Biden, but did not refer to him as president-elect.

Mr Putin, Brazilian president Jair Bolsonaro and Mexican president Andrés Manuel López Obrador are among a handful of world leaders who have yet to congratulate Mr Biden.

“You know that reviews and recounts in some states are still continuing, without which the results of the election cannot be officially announced,” Mr Peskov said, according to Interfax.

After a furore over Mr Trump’s ties to Russia dashed hopes in Moscow of a thaw with Washington, the Kremlin is pessimistic ties will improve with Mr Biden, whose prospective cabinet includes several Russia hawks.

“Whoever ends up in the White House after January 20th 2021, I see no reason to hope for a dynamic improvement in Russian-American relations,” deputy foreign minister Sergei Ryabkov said on Tuesday, according to the Tass news agency.

The Trump administration has put antagonism with China at the heart of its foreign policy, on issues ranging from trade and defence to Hong Kong and coronavirus. It had listed China as a “great power competitor” amid a series of abrasive actions, leading some to speculate that a new cold war was afoot.

“The game has now begun; the first domino has fallen,” said Evan Medeiros, who was Barack Obama’s top adviser on the Asia-Pacific, of the congratulatory message, characterising the effort to manage the US relationship with China as one of the biggest challenges facing the Biden administration. “Let’s see what happens,” he said.

Bipartisan support for a tougher US posture against China has led many to believe the Biden administration will pursue a harder line against Beijing than the Obama administration. Mr Biden has referred to Mr Xi as a “thug” and said the US needs to “get tough” with China.

Biden officials have also suggested the US approach must combine co-operation, competition and confrontation. Jake Sullivan, Mr Biden’s pick for national security adviser, said in a piece he co-authored last year that the US must avoid “a dangerous cycle of confrontation” with China.

Antony Blinken, Mr Biden’s nominee for secretary of state, has said any effort to decouple from China would be unrealistic and counter-productive, and suggested developing areas of co-operation over climate, nuclear non-proliferation and health.

A former Obama administration official said that highlighting US intentions to avoid a cold war risked “handing leverage” to China, however.

“[Some argue] in very practical, tangible terms there’s not really a lot that China offers us on climate and Covid besides rhetorical support, and that really what we need to do is fix our alliances, develop our posture in Asia, get our act together at home and then from that foundation pursue a more competitive approach with China,” said the former official.

In December 2016, Chinese officials were infuriated when Mr Trump, then president-elect, took a phone call from President Tsai Ing-wen of Taiwan, the self-governed island that Beijing claims as part of its sovereign territory. Mr Xi did not speak with Mr Trump until after his inauguration.

During his first phone call with Mr Xi in February 2017, Mr Trump reiterated his administration’s support for the “One China policy” that Washington has maintained ever since formally establishing diplomatic relations with Beijing in 1979. – The Financial Times