Ireland can transform a Brexit crisis into a breakthrough

World View: Two studies are under way to plan for potential changes from UK’s exit 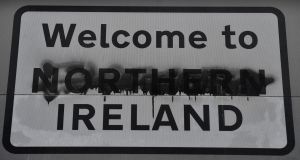 A defaced ‘Welcome to Northern Ireland’ sign is displayed on the Irish Border in Derry. Photograph: Charles McQuillan/Getty Images

“‘How did you go bankrupt?’ Bill asked. ‘Two ways,’ Mike said. ‘Gradually and then suddenly.’”

Ernest Hemingway’s insight may be applied to breakthroughs as well as to breakdowns and break-ups. Mike Campbell’s financial problems in Hemingway’s 1926 novel The Sun Also Rises accumulated over a long time, for which he blamed friends and creditors. On an optimistic reading, the problems could be addressed effectively before bankruptcy, putting him – and/or his creditors – on a new path. The key issue is prior understanding and action to head off sudden collapse and transform it into sudden breakthrough.

Both kinds of diagnosis are being made of Brexit. Citing Hemingway, a senior British source told the recent British-Irish Association conference he anticipates a deal to emerge on the Irish backstop from an intense phase of negotiating, notwithstanding the repetitive and intractable character of the talks. Other speakers diagnosed their more probable breakdown in a no-deal UK crash-out from the EU. A further group foresaw a possible break-up of the UK itself through Scottish independence and Irish unity under such pressure.

Evidence-based analysis and inclusive deliberation of its findings and perspectives are needed if public policy is to understand and act in such crises. That is the spirit underlying the research project under way at the Institute for British-Irish Studies in University College Dublin entitled Constitutional Futures after Brexit, a project of which I am the director.

Founded after the Belfast Agreement in 1998, the institute has conducted extensive research on the agreement’s three strands: powersharing in Northern Ireland, North-South links and Republic of Ireland-UK relations. The new project applies social science methods to analyse and anticipate possible futures arising from Brexit which can then be deliberated by citizens, officials and political decision-makers in Ireland and Britain. Mini-publics, citizens’ assemblies and forums and scenario brainstorming are being planned alongside seminars and publications.

Depending on whether Brexit is soft or hard and linking that dimension to the centralisation or dispersal of constitutional and political power within the UK, four plausible scenarios are identified. They range from the most radical – UK break-up – through, alternatively, a renegotiated, differentiated or federal state. In each case there are major implications for Ireland which need to be explored; however, if this senior British source is right, a successful Brexit would hold the UK together rather than tear it apart.

That unionist position needs to be discussed frankly by unionists and nationalists alike, since both are directly affected. The very fact that Irish unity is now part of a growing political agenda presents a dilemma for unionists: why should they deliberate their end? But if they don’t they are less well equipped by these three suggested alternatives to head it off – and in Northern Ireland they must convince growing numbers of nationalists and younger voters who identify with neither tradition that the UK’s union is a better deal.

Ireland’s international reputation for deliberation is much stronger after the citizens’ conventions and assemblies held from 2012-14 and again before the gay marriage and abortion referendums. They opened up layers of issues that had previously not been discussed, allowing for multiple perspectives based on fair and accurate information. That in turn improved political debate, including by ensuring referendums took place to endorse agreed legislation.

Many activists and political parties involved in the UK’s Brexit debate look to Ireland for good practice in political deliberation along these lines and want to apply it at home. Here, those concerned with ensuring that any Border poll or unification referendums that might arise from the Belfast Agreement do not repeat the mistakes made in the UK’s Brexit poll make the same case. Everyone concerned is entitled to know what they are being asked to decide.

It will examine the trigger for the referendums, the likely and preferred extent of inter-governmental and political negotiations before and after they are held in Northern Ireland and the Republic, and whether there might even be four votes required rather than two.

Brexit has accelerated gradual shifts in the UK and Irish political order into the current sudden critical juncture. Friends and creditors alike have a deep interest in an informed debate on how it should be managed and acted upon.

1 Tyrone midwife on the cover of Vogue magazine
2 Donald Trump is in trouble, and that could spell very bad news
3 Pubs reopening will not mean ‘fellas having a few pints and peanuts’, Holohan warns
4 California police fatally shoot 22-year-old man on knees with hands up
5 ‘White Irish people have never had to think about this’
Real news has value SUBSCRIBE