Why shouldn’t China assert itself globally? 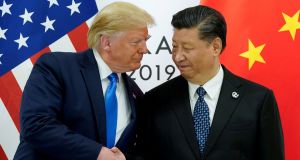 US president Donald Trump and China’s president Xi Jinping at the start of their bilateral meeting at the G20 leaders’ summit in Osaka, Japan, in June. Photograph: Kevin Lamarque/Reuters

“It is not a new Asia but the re-emergence of an old Asian order from pre-colonial times. Where China and India are now was part of the natural order for 1,000 years before that and will be the reality for the next 1,000 years.”

It is salutary for a European to hear this view of contemporary Asia from one of its leading diplomats. Raja Dato’ Nushirwan Zainal Abidin is leaving his post as deputy secretary-general of Malaysia’s ministry of foreign affairs to become his country’s ambassador to China. He was speaking at a conference in the University of Malaya on the subject “Europe in the new Asia: new anxieties, new constructs”.

Taking issue with some of the conceptual underpinnings of this title he sharply criticised a recent article by Carl Bildt, the former Swedish prime minister, which was part of the preparatory readings. Bildt calls for a stronger European Union foreign-policy regime to avoid Europe becoming marginalised in a world of great power competition between the United States, Russia and a China that has moved “from being a benevolent trading partner to an assertive promoter of its own global ambitions”.

Raja Nushirwan asked why an assertive China is a problem. Is it not natural and unsurprising for an (re-)emerging power to promote its global ambitions? Would Bildt say the same about a western country making the same transition? There is a latent racism at play here, he said, since it is okay for white men but not brown or yellow ones to do that. The West will have to get used to the rest of the world having such ambitions and becoming agents of their own destiny.

As a Malaysian diplomat he does not think in zero-sum terms about strategic issues such as dealing with China, as many Western strategists assume must be the case. He rejects the idea that not to choose is to lose. Southeast Asian states should engage and bargain with the new realities in their region. Recent policy statements by Asean (the Association of Southeast Asian Nations) call for the centrality of their soft regionalism which brings together 600 million people – and for whom both India and China are part of their historical and civilisational inheritance.

Non-western perspectives on international relations was a related salutary theme of these discussions. The Indian-born theorist Amitav Acharya presented his recent work on the subject, set out in his book The End of American World Order. He says this is not about US decline but rather erosion of the liberal international order it set up after the second World War and dominated until recently. Donald Trump is a consequence not a cause of this change. It signifies a shift of power and influence from the West to the rest of the world, no longer limited to the Atlantic littoral where that liberal order was dominant.

It is a multiplex world rather than a multipolar one, Acharya argues. Multipolarity harks back to 19th-century European and inter-imperial rivalry. It does not take account of the rising global south, new regionalisms, the huge growth of world trade and associated economic and financial corporations. These are all new interdependent actors rather than being dependent on global powers. The dispersal and proliferation of agents in this more decentred world makes the image of a multiplex cinema with numbers of films playing simultaneously a more compelling narrative than resurrected strategic ones from the imperial-colonial period. That is also the case in Asia, where old ideas of Chinese suzerainty must give way to newer interdependencies.

Looking at this vast region stretching from the Indian ocean to the Pacific, which is becoming the centre of world commerce and politics surpassing the Atlantic, there is all the more reason to encourage much greater European engagement there on a basis of equality and mutual respect.

Two more Indian international relations scholars who spoke, SD Muni and Rahul Mishra, have written a book, India’s Eastern Engagement – From Antiquity to Act East Policy, which maps its long historical involvement in southeast Asia. The spread of Hinduism, Buddhism and Islam are part of that story, based on mutual adaptation and exchange, including with China.

That spirit is re-emerging in major regional initiatives over which western powers have little influence, such as China’s Belt and Road policy, the AIIB bank and the Shanghai Co-operation Organisation.

Europeans should welcome these huge changes and debate much more thoroughly how best they can engage constructively with them.