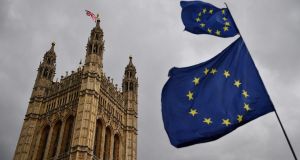 “A hard-Brexit UK is finding itself dependent on an America First agenda in a much more zero-sum world dividing into competing blocs.” Photograph: Daniel Leal-Olivas/AFP/Getty Images

Power is returning as a major causal factor in world politics and international relations. That can readily be seen as Donald Trump’s foreign policy creates a more multi-polar world, in the Brexit negotiations between the United Kingdom and the European Union – and in both of their potential effects on British-Irish relations.

Power, like Brexit, comes in hard and soft forms. Coercion, command, threats and sanctions lie at the harder end of the power spectrum while persuasion, attraction and solidarities define its softer form. The harder the Brexit outcome, especially if there is no deal, the more such harder power elements will come into play.

In assessing how this is likely to work out from the Irish point of view these wider power relations need to be factored in. A shift from softer to harder power is not good news for smaller states with fewer military or financial resources at play. That is why they favour multilateral relations over bilateral ones and feel empowered by the greater equality available from multinational organisations such as the European Union.

The next few months will bring such forces together in an unprecedented way as the Brexit endgame plays out. If it is determined bilaterally a small state such as Ireland is put in a weaker position. That is one good reason the Government is holding fast to its European membership and solidarity, so far with widespread public support.

A clear calculation among the hard Brexiteers is that such multilateralism will weaken as hard power is applied, allowing more bilateralism between the UK and the United States, with EU member states and alongside that between Britain and Ireland and within the UK itself. If they are right their audacious gamble has more chance of succeeding. If they are wrong the Government is correct to hold tight and ride out the coming whirlwind as best it can while waiting for the power calculus to work itself out.

The hard Brexiteers believe the EU’s ambition to become a federal superstate is decisively weakened by the UK’s departure and need to demonstrate their success rapidly by setting a precedent for its further disintegration. Just as they misjudge the EU’s real character and trajectory so they also seriously underestimate how much weaker the UK’s bargaining position is made by a departure in which it loses institutional leverage. That showed up in the May government’s negotiation – and the same balances of forces will be reproduced if there is no deal.

The UK’s actual bargaining weakness is further shown in its negotiations on a trade deal with Trump’s US. Documents leaked to the Daily Telegraph reveal a sorry cycle of ill-preparedness, inability to decide on reduced regulatory and health standards across the government and a high turnover of staff on the UK side, compared with a ruthless determination on the US one to gain maximum advantage from UK weakness.

Instead of emerging from the EU into a free-trading and globalising environment, a hard-Brexit UK is finding itself dependent on an America First agenda in a much more zero-sum world dividing into competing blocs. In this new setting the scope to expand trade as they imagined beyond the existing predominant reliance on EU partners is much diminished. And the lowering of environmental, health, labour and regulatory standards they hoped to disguise behind nationalist rhetoric is made more transparent.

The Irish Border would define that boundary. It would have to be controlled to preserve the EU single market’s integrity. By putting that fact in the spotlight the Brexiteers expect to reassert Britain’s bilateral power over Ireland. Such power is a product of history, geography, demography and wealth but is mitigated and balanced by EU membership and US diasporic soft power.

A further power relationship is brought to bear in this crisis – within the UK itself. Brexit radically recentralises power back to Westminster/Whitehall over the devolved authorities in Scotland, Wales and Northern Ireland. The harder the Brexit the more strained those internal relationships become. Some leading Northern Ireland unionists say in private every DUP supporter who voted Leave should have been aware they voted for a united Ireland. Scottish nationalists expect no deal to bring a second independence vote closer.

It would be a great irony if the Brexiteers’ desired EU disintegration in fact applies to the UK instead. Asserting hard power undermines unionism by encouraging its weaker partners to seek solidarity elsewhere. In these circumstances one plausible time limit on the Irish backstop would be an Irish Border poll.