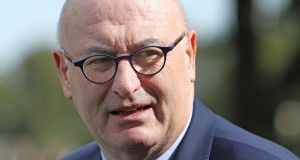 Phil Hogan raised possibility that the UK may not ultimately exit the EU given that the upcoming election could lead to a new government with a different mandate from the British people. Photograph Nick Bradshaw/The Irish Times

The United Kingdom may have a new prime minister in several weeks who may decide not to exit the European Union, newly nominated EU trade commissioner Phil Hogan has said.

Speaking to an audience at the RDS in Dublin, Mr Hogan said that the actions of some members of the Conservative Party to block a no-deal departure had improved the likelihood of a further extension to the Brexit deadline beyond October 31st and a general election in November.

This has concentrated the mind of the British prime minister Boris Johnson and left him in a “vulnerable position” without a parliamentary majority, he said.

He believed Mr Johnson would make “every possible effort to do a deal” between now and the resumption of the UK parliament on October 14th. He thought that the prime minister wanted a deal “but not everyone around him wants a deal,” said Mr Hogan in a thinly veiled reference to the prime minister’s aide Dominic Cummings.

In response to a question about Remainers not voting for the proposed Brexit deal, Mr Hogan raised the possibility that the UK may not ultimately exit the EU given that the upcoming election could lead to a new government with a different mandate from the British people.

“You are presupposing that the United Kingdom are going out of the European Union. They may not. Mr Johnson has a big responsibility in the next four weeks. It could fall to somebody else on the fifth week and you could have a second referendum and this will be dependent on the mandate that whatever new government the UK will get in November,” he said.