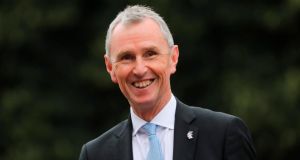 Conservative MP Nigel Evans: ‘Two-thirds of the medicines Ireland gets come through the UK. If there are shortages in the UK, there’ll be shortages in Ireland.’ Photograph: Isabel Infantes/AFP/Getty

Suggestions by a Tory MP that Ireland will have difficulties sourcing medicines in the event of a no-deal Brexit have been refuted by the Department of Health.

Hardline Brexiteer Nigel Evans revealed on LBC Radio that he had a conversation with Brexit secretary Steve Barclay last week about planning for no-deal.

In response to suggestions that there will shortages of medicine in the UK in the event of a no-deal Brexit, Mr Barclay is said to have replied to him: “Two-thirds of the medicines Ireland gets come through the UK. If there are shortages in the UK, there’ll be shortages in Ireland.”

The remarks were condemned on social media as suggesting that Britain would punish Ireland by withholding medicines in the event of a no-deal Brexit.

They were also compared to comment made by his fellow Tory MP and now home secretary Priti Patel back in December last year in response to suggestion that a no-deal Brexit could lead to food shortages in Ireland.

“This paper appears to show the government were well aware Ireland will face significant issues in a no-deal scenario. Why hasn’t this point been pressed home during negotiations?” she told the Times in reference to the report.

The Department of Health has said Ireland has a different supply model for medicines to that which operates in the UK.

The Department stressed it was confident there will be sufficient stocks to deal with all contingencies and that steps have been taken to ensure that there is not an immediate impact on the supply of medicines.

The Department states that there are already additional stocks of medicines routinely built into the medicine supply chain.

It added: “The pharmaceutical industry and wholesalers have provided assurance that they are confident they will have sufficient stocks to bridge any initial issues at ports, should they occur.

“There is no need for hospitals, pharmacists or patients to order extra quantities of medicines, or for doctors to issue additional prescriptions, as doing so could disrupt existing stock levels and hamper the supply of medicines for other patients.”

“Any products that may be affected would be unlikely to be critical to continuity of care as there are and will be alternative suppliers or therapeutic alternatives available,” the department maintains.

“Medicine shortages are a feature of modern health systems, but Ireland has a multi-stakeholder system in place to prevent and manage shortages when they occur.”