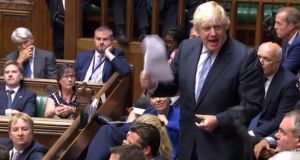 “We were worsted in the game.” This haunting refrain comes from the song After Aughrim’s Great Disaster. It refers to how the story of Ireland’s conquest and defeat by Williamite armies in 1690 was told by a vanquished band who survived that gruesome battle.

The game of European politics between the armies of Louis XIV and his English and Dutch antagonists was played out in Ireland that year, copperfastening its political and religious conquest and transfer of land in the subsequent Williamite settlement. As the final verse of the song says, the group went the next day with Sarsfield “to take our stand and wield a brand among the sons of France”. They hoped Ireland’s future sons would be “true when needed” and “never fail as we did”.

Such memories are revived for unionists and nationalists alike by the current Brexit crisis, as Ireland’s Border comes centre stage in the confrontation between Boris Johnson’s government and the European Union. Katy Hayward suggested in this newspaper that English and European governments are “once again, as in 1690, shaping up to use the island of Ireland as an ideological battleground”. Her further thought that it will possibly “leave the locals to live with the consequences for generations to come” is rejected by those who say Ireland is being used as an ideological battleground now, not by European governments, but by English nationalists.

Nevertheless 1690 resonates with DUP unionists like no other date. They have responded enthusiastically to Johnson’s shifting priorities on Brexit and the iconic links he makes between the Irish border backstop and British sovereignty. They also approve the line he takes on the backstop as representing, in Hayward’s words, “all that British Eurosceptics dislike and distrust about the EU: infringement of sovereignty, democratic deficit, ‘competence creep’”.

This repolarisation of Northern Ireland politics puts the Belfast Agreement itself in question. Its vision of multiple identities, shared or pooled sovereignty and open borders is counterposed to the recentralised executive constitutional power in Westminster/Whitehall on full display in this week’s proroguing of parliament.

It goes with a hard Brexit, driven well beyond Theresa May’s Chequers deal of July 2018, which sought a closer but bespoke relationship with the EU. Johnson resigned against that and now seeks a much more distant Canada deal to accompany a closer relationship with Trump’s United States. He specifically rules out a dynamic regulatory level playing field between the UK and the EU, making the border a strategic boundary between two competing regulatory blocs.

For Irish nationalists 1690 recalls continental defeats, betrayals - and European solidarities which seem now to rebalance such historical wrongs. They are determined not to be worsted in this new game of politics played out by English Conservatives. The sentiment unites many strands of Irish nationalism and crosses party boundaries.

Irish nationalism is most internationalist when it is anti-imperial. In this crisis it identifies at elite and popular levels with EU resistance to demands for British sovereignty echoing previous imperial claims. It values mobility over border controls, reflecting a widespread preference among younger voters throughout the EU. They value the continental freedoms to travel, work and settle given by European citizenship and enabled by the single market and customs union.

The Irish Government’s refusal of Anglo-Irish bilateralism and preference for European solidarity perplexes the hard Brexiteers.

These historically highly unusual rights created by European integration have become so taken for granted by hard Brexiteers as to become assumed achievements of continuing Irish-British cross-border cooperation after Brexit, Kevin O’Rourke points out in the Guardian. In fact they are legally contingent on joint EU membership or on a continuing softer and close British relationship with the EU, even in the bilateral relationship covered by the Common Travel Area between Britain and Ireland.

The Irish Government’s refusal of Anglo-Irish bilateralism and preference for European solidarity perplexes the hard Brexiteers. They represent people who are simply unaware of these resonant histories defining Irish unionists and nationalists, while their own ignorance of, and disregard for them weakens their ability to understand and act on the Irish border.

Political trust has been so much eroded between the UK and its Irish and EU interlocutors by this crisis that alternatives to the backstop requiring it are dismissed as unpracticable in Dublin and Brussels. Assuming Johnson’s main objective is to win a general election the most plausible and acceptable outcome of the Irish backstop would be a Northern Ireland only link to the EU making it unnecessary. That would allow all sides to say they were not worsted in this game.

1 Money matters: ‘My father embarrassed us with his haggling’
2 Dancing with the Stars: Glenda Gilson sinks like Titanic
3 No obvious signs of injury on remains of McGinley children
4 Why our love for Leo is withering on the vine
5 Snow expected as Met Éireann issues status yellow weather alert
Real news has value SUBSCRIBE