Glennon Brothers to invest €15m in its Scottish mill 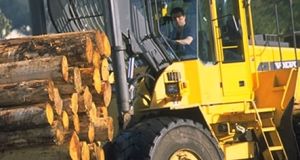 Irish sawmiller Glennon Brothers is spending more than €15 million at its Scottish plant this year following an investment of €20 million in a flagship facility in Fermoy, Co Cork.

Glennon Brothers, a third-generation sawmill business that sells its products throughout Ireland and the UK, now employs about 500 people directly at its plants in counties Cork and Longford and at Windymains, in Troon, Scotland.

The company is spending £14 million (€15.6 million) at Windymains this year on a new log yard and on equipment that will lift production by an extra 40,000sq m at the Troon mill.

In 2018, Glennon spent the same sum on a biomass burning plant that provided heat and power to its Scottish mill.

Glennon Brothers has spent €20 million over the past five years on its Fermoy mill, which included €14 million on advanced systems for grading the quality of the logs that the facility processes.

Co Longford-headquartered Glennon calculates that it spends €46 million a year on buying logs and paying workers, money that is mainly recycled back into the rural areas where the business operates.

However, the company fears that Brexit threatens its business and the broader forestry industry, which adds €2.3 billion a year to the Republic’s economy and employs 12,000.

Speaking as Minister for Agriculture Michael Creed and Minister of State for Equality David Stanton visited the Fermoy facility on Tuesday, joint managing director Pat Glennon argued that forestry was a clean industry where the Republic had a natural advantage. He called for continued Government backing for the sector.

“We have to work together if we are to maintain a sustainable industry for the economy as a whole and for the local communities we are proud to be connected with,” Mr Glennon said.

Fellow joint managing director Mike Glennon pledged that the company would continue investing in the business.