The Irish Times view on the Scally report: key questions yet to be answered 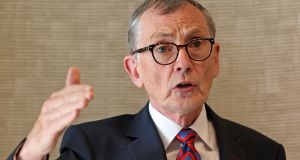 Dr Gabriel Scally is to be commended on his investigations into CervicalCheck, which were prompted by widespread public concern in the aftermath of Vicky Phelan’s court case last year and subsequent revelations of undisclosed audits. Photograph: Crispin Rodwell

Dr Gabriel Scally is to be commended on his investigations into CervicalCheck, which were prompted by widespread public concern in the aftermath of Vicky Phelan’s court case last year and subsequent revelations of undisclosed audits. His work has helped steady the screening ship, by clearly pointing to failings in the system while providing reassurance about the quality of testing. Empathetic in tone and inclusive in scope, his two reports resonate with the voices and concerns of the women at the centre of the controversy.

Dr Scally’s supplementary report, published on Tuesday, sheds further light on the extent to which smear tests were outsourced to unapproved laboratories by the private companies that carry out most of the screening work for CervicalCheck. About 250,000 tests were carried out for the Irish screening programme in hitherto unknown labs in the US and the UK. It is important to note, however, that Dr Scally finds no evidence of deficiencies in quality assurance at any of these labs.

Not finding evidence of shortcomings is not the same as saying definitively there were no shortcomings. But given Dr Scally’s assurances, and the fact that CervicalCheck bosses have recently given similar assurances after inspecting the main labs in the US for the first time in five years, it is reasonable to assume testing standards in the screening programme are up to scratch.

Dr Scally’s work is complete but many questions remain to be answered. The central one is whether women’s slides were negligently misread; this has been the finding in a handful of court cases but it is doubtful whether we will ever have a broader answer to this question. A review of individual slides currently underway by the Royal College of Obstetricians and Gynaecologists in the UK may shed more light on historical standards in the screening programme.

The Government remains caught between a rock and a hard place on the issue. It is still dealing with the understandable anger of women patients who were left in the dark about the audit of their slides and the alleged misreading of tests. Plans to set up a tribunal to hear cases in private, away from the public court setting, are moving forward at a snail’s pace.

On the other hand, as senior medical figures have advised, increased litigation is undermining not only CervicalCheck but all screening programmes. Their cost effectiveness is increasingly in doubt. Doctors say the courts have unreasonable expectations of the standards that should apply to testing in a screening programme. With the issue far from resolved, difficult decisions will have to be made, the first of which is whether the State appeals the recent High Court judgment setting out the “absolute confidence” standard for screeners.