The Irish Times view on the Sudan crisis: a brutal counter-revolution 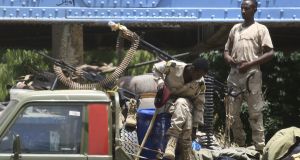 A violent counter-revolution is under way in Sudan. In a pattern reminiscent of events in Egypt in 2013 and in Algeria just this year, the overthrow of a despot after popular street demonstrations has been followed by a standoff between the instigators of change and an entrenched military elite intent on preserving its power and wealth.

The Sudanese military arrested the veteran dictator Omar al-Bashir in early April after an 11-week uprising, but the ensuing talks between the civilian-led protest movement and the military became deadlocked over who would control a sovereign council that would oversee a three-year transition towards democratic elections. The stalling of the talks was the spark for the military to reassert itself. Soldiers from the Rapid Support Forces (RSF), a paramilitary unit that grew out of the feared Janjaweed, the militia accused of genocidal violence in Darfur in the 2000s, attacked a protest site where demonstrators had been encamped for the past two months. At least 35 people were killed and hundreds more wounded. A wider crackdown has led to at least 118 deaths since June 3rd, according to a group of doctors aligned to the opposition (the government has confirmed 61 deaths). In Khartoum, internet access has been suspended, military checkpoints have appeared and protesters have been forced to go underground.

The generals were closely tied to Bashir’s murderous regime, and they benefited from that connection with power, status and money. Several autocrats in the wider region fear democracy taking hold in Sudan, which helps explain why Egypt, Saudi Arabia and the United Arab Emirates have offered support to the military in Khartoum.

That makes it all the more important that the rest of the world, led by the European Union, pledge solidarity with Sudan’s democratic movement – not through mere boilerplate condemnation of violence but with tangible action, first by applying pressure on the junta’s foreign backers and then by sanctions against the old regime leaders themselves.