The Irish Times view on the IFAC report: Government must listen on spending 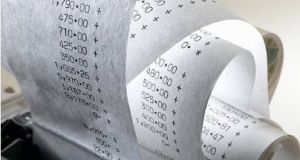 One of the central points of the IFAC analysis is that the Government needs to control spending growth and to stay within its annual targets. File photograph: Getty

The latest warning to the Government from the Irish Fiscal Advisory Council (IFAC), the budget watchdog, comes as Minister for Finance Paschal Donohoe puts the finishing touches to his Summer Statement. As the first formal statement of the direction of Budget planning, it is important in itself and made more difficult this year by the uncertainties of Brexit.

One of the central points of the IFAC analysis is that the Government needs to control spending growth and to stay within its annual targets. Health spending has exceeded budget consistently in recent years and this has been paid for by soaring corporate tax revenues. The risk is obvious – if overspending continues and tax revenues weaken, budget forecasts could quickly go awry.

Donohoe has underlined the danger of relying on potentially transient revenues and is putting in place a rainy day fund. The key messages from IFAC is that he must deliver on spending plans for this year – avoiding further slippage from stated targets – and frame the 2020 Budget within the constraints assumed in official forecasts. The temptation to spend more in the run up to an election will be strong as will the desire to avoid any countervailing measures that might upset the electorate. Yet the more spending rises on the basis of uncertain revenues, the greater the risk.

The Government faces a difficult job dealing with the uncertainties of Brexit which, as the IFAC warns, could present “profound” risks if there is a no-deal disorderly outcome. The first job of the Summer Statement – without which it will be of little value – is to recognise this and to outline a strategy.

But there are other challenges too. The medium-term outlook for the public finances needs to be put on a realistic footing, recognising the potential impact of international corporate tax reform. And the need to start adjusting for climate change goals is urgent.

Is this Government up to these challenges? Or will we again see ministers hoping for the best and trying to bribe the electorate with their own money as a general election looms?

1 Coronavirus: Irish citizens advised not to travel to Italy’s affected areas
2 Bank leaked my loan request to family who tried to rip me off
3 Why Sinn Féin will not call the State by its name
4 Maureen Dowd: For the White House parasite, all restraint has gone
5 Questions raised over Ireland v Italy fixture due to coronavirus
Real news has value SUBSCRIBE