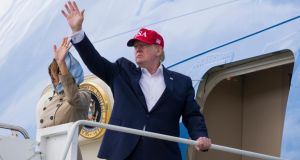 US president Donald Trump and first lady Melania wave in front of the door of Air Force One before departing Shannon airport on Friday. Photograph: Alex Brandon/AP

US president Donald Trump’s policies are so linked to his personality that it is difficult to disentangle the two. Both were on display this week during his state visit to the UK, his participation in moving ceremonies for D-Day and his two days in Ireland.

His public and private concerns are similarly linked in a combination that appals and appeals but which commands and guarantees attention. His support for Brexit, pursuit of protectionist trade deals, preference for patriotism over internationalism and ill-informed goodwill towards Ireland were consistent themes and goals over these five days.

The United States is the most powerful country in the world. That makes President Trump a key player in international politics and necessitates close coverage of how he wields such huge influence. He has proved a master at mediating and manipulating power by disrupting the usual channels through which it is expressed.

His Twitter interference in domestic British affairs was then combined with normal politics in a way that coarsens its overall tone but delivers on his goals. Applied to Brexit his message that a rapid trade deal with the UK after it leaves the EU would compensate for other losses lacks factual support but serves his view of US interests.

Trump’s speech to the Normandy D-Day ceremony dwelt at length on individual acts of bravery by American soldier veterans, emphasising his belief that national patriotism is a primary value. Reports of his evident displeasure when president Emmanuel Macron addressed him directly by saying the United States “is never greater than when it fights for the freedom of others” eloquently reveal the great contrast between their two philosophies.

Behind this interaction lies a deepening transatlantic gulf over universal rights, multilateral means and economic interests. US trade conflicts with China, Iran and Mexico are geopolitical issues dividing allies and forcing Europe to organise its own interests more effectively.

Ireland is on the frontline of these changes, even as a small state which wants and needs to preserve our links with the US, the EU and the UK. A hard Brexit would re-establish the Irish Border economically as a boundary between two diverging regulatory regimes.

As Taoiseach Leo Varadkar said to Trump in Shannon that – and its security trappings – are what this State does not want, notwithstanding the president’s comparisons to a Mexican wall or border.

Hopefully, Trump’s visit has provided an opportunity to clarify for him and his officials why that is so and Ireland’s determination, with EU support, to stop it happening.

Trump returns to a US preoccupied with the Mexican issue and a row with Democrat House Speaker Nancy Pelosi over his impeachment. That she is also determined to stop the reinstallation of the Irish Border shows US goodwill towards Ireland cuts two ways.