The Irish Times view on churches and sexuality: A relentless obsession

Society has moved on to a more humane plane, more in tune with the message of Christ 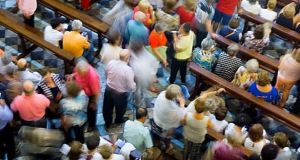 ‘The churches are entitled to apply their own rules and to minister to their flocks as they see fit.’ File photograph: Getty

At the General Assembly of the Presbyterian Church in Belfast last week, former Moderator Norman Hamilton said historic biblical values were no longer accepted as the norm by society. He acknowledged that his critical reflection on changing values would not go down well with some. He spoke in the context of the wider debate on issues such as same sex marriage which he and the Church oppose.

The latter has decided that same-sex couples are not eligible for communicant membership; barred children of such couples from baptism; and severed links with the Church of Scotland, its mother church, because it sees it as too liberal on same sex issues. Such are its “biblical values”.*

The previous weekend US Catholic Bishop Thomas Tobin, of Providence Rhode Island, caused a furore when he tweeted advice to parents as they headed into Pride month, when gay people celebrate who they are where they can. He tweeted: “A reminder that Catholics should not support or attend LGBTQ ‘Pride Month’ events held in June. They promote a culture and encourage activities that are contrary to Catholic faith and morals. They are especially harmful for children”. Such are its “faith and morals”.

Meanwhile, the Church of Ireland, as with Anglicans worldwide, faces possible schism over the same-sex issue as members, including two bishops, support Gafcon which describes itself as “a global family of authentic Anglicans standing together to retain and restore the Bible to the heart of the Anglican Communion”. If you’re gay, you would be right to be wary of such authenticity.

This obsession with human reproduction and sexuality issues in general, but homosexuality in particular, is sundering churches

It is a tragedy of Christianity that it has always seemed to need a scapegoat. For almost 2,000 years Jews filled that role. Then the Holocaust took place. Still, it was 1959 before the phrase “perfidious Jew” was removed from the Catholic Church’s Good Friday liturgy. “Biblical values” were used then too to justify persecuting Jews.

And persecuting gay people, through exclusion, for being gay is what we are discussing here, however nicely dressed in “authentic” biblical text. Pope Francis has ushered in a more compassionate approach but Catholic Church Catechism still defines homosexuality as “intrinsically disordered”.

This obsession with human reproduction and sexuality issues in general, but homosexuality in particular, is sundering churches at a time when wider society has moved to a more humane plane; one seemingly more in tune with the message of Christ who had little to say on these matters.

The churches are entitled to apply their own rules and to minister to their flocks as they see fit. Yet it is unfortunate that this blindspot in the churches’ vision continues to obscure the positive message they were founded to propagate. Those who wonder why they are in decline and who prefer to blame secularism, might find an answer – at least in part – closer to home.

1 Bank leaked my loan request to family who tried to rip me off
2 Spread of coronavirus triggers European travel curbs
3 Why Sinn Féin will not call the State by its name
4 What evidence is there that the IRA still controls Sinn Féin?
5 Brazilian father to be deported days after daughter’s birthday
Real news has value SUBSCRIBE