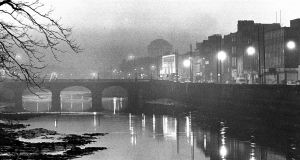 A file photograph from 1988 shows smog over Capel Street bridge in Dublin, with the Four Courts in the background. Photograph: Matt Kavanagh

If the Government is to have any credibility in terms of public health protection and action to combat global warming, it must follow through on its commitment to introduce a State-wide ban on smoky coal. The major cities and towns are already covered by such a restriction but a threat of legal action by coal merchants caused Minister for Climate Action and the Environment Richard Bruton to postpone the introduction of a total ban on bituminous coal earlier this year.

The protection of public health should be the primary consideration in this instance and evidence of the damage caused to individuals by the ingestion of particulate matter arising from the burning of smoky coal is indisputable. It has been estimated that diseases caused by such air pollution are responsible for between 1,000 and 1,500 deaths a year in Ireland.

Bruton deferred the total ban on smoky coal in spite of official reports concerning the likely health consequences. His decision cannot be allowed to stand

Many of those deaths occur in small villages and towns that have poorer quality air than their neighbouring cities. At some locations, such as Enniscorthy in Co Wexford, the topography of the town ensures that safe air quality standards set by the World Health Organisation are frequently breached.

It is now 29 years since a ban was imposed on smoky coal in Dublin. That decision led to an immediate improvement in air quality and public health. The ban was later extended to Cork and other major cities and towns. The latest research has shown that air quality in those towns not included in the ban is inferior to that in larger settlements, in spite of differing population and traffic densities.

The last government announced it would impose a total ban on smoky coal. After years of dithering, it was decided that action would be taken before next winter. Fuel merchants were given time to run down their stocks of dirty coal and to import more expensive, smokeless fuel. Two months ago, Bruton deferred such action in spite of official reports concerning the likely health consequences. His decision cannot be allowed to stand.