The Irish Times view on Spanish government formation: Problems, past and present 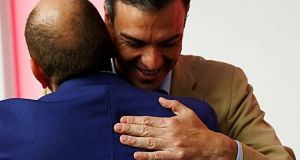 Spanish Socialist Party (PSOE) leader Pedro Sánchez enters difficult negotiations to form a new government this week, under the shadow of two Supreme Court cases that epitomise underlying problems in the country’s democracy. He has led a weak minority government since defeating the Partido Popular (PP) in a confidence motion a year ago. He performed well in general elections in April, aided by the splintering of the right and the decline of his leftist rivals, Podemos, but he still fell well short of a majority.

The Supreme Court last week paralysed one of Sánchez’s keystone projects, the exhumation of former dictator Gen Francisco Franco from his mausoleum near Madrid

Sánchez faces a complex task in securing votes or abstentions from other parties to become prime minister, having delayed negotiations until after the recent local and European elections which reinforced his position. To avoid giving ammunition to an increasingly militant Spanish nationalist right, and to critics within his own party, he must navigate to a majority without help from pro-independence parties in either Catalonia or the Basque Country.

Meanwhile, the Supreme Court last week paralysed one of Sánchez’s keystone projects, the exhumation of former dictator Gen Francisco Franco from his mausoleum near Madrid, a propagandistic monument offensive to Spanish democrats. The court controversially described Franco as having been ‘Head of State’ from October 1936. At that moment, he was leading an armed insurrection – a prolonged coup d’état – against a legitimate democratic government. He did not win the ensuing civil war until 1939.

Echoes from this case inevitably carried over into another Supreme Court hearing last week in which closing prosecution arguments were heard against Catalan leaders who oversaw the illegal referendum for independence in 2017. The prosecution said they had organised a ‘coup d’état’, an accusation their supporters found remarkable given the court’s almost simultaneous decision about Franco’s status in 1936.

Sánchez will need skill in more than vote negotiation if he is to lead Spain into a period where its very painful past, and contemporary issues of national identity, can be dealt with calmly and fairly.