The Irish Times view on migrants and coronavirus: exposed and vulnerable

NGOs fear lack of testing in camps may conceal an iceberg of disease. When the pandemic takes off, death rates will soar 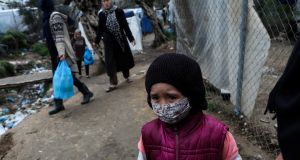 A girl wears a protective face mask at a makeshift camp for refugees and migrants next to the Moria camp, during a nationwide lockdown to contain the spread of coronavirus, on the island of Lesbos, Greece. Photograph: Elias Marcou/Reuters

Although to date there been few reports of significant coronavirus clusters in overcrowded refugee camps, whether in huge camps like Cox’s Bazar in Bangladesh or Moria on Lesbos, NGOs have been urgently warning of an impending medical catastrophe.

Greece’s government has described the Aegean island facilities where some 40,000 are trapped as “ticking health bombs”, while UN high commissioner for Refugees Filippo Grandi warns that refugees and asylum seekers are particularly vulnerable. He has urged states not to force “the closure of avenues to asylum, or … people to return to situations of danger”.

The message is not being heeded. Last Thursday Italy and and Libya closed their ports to rescued migrants, leaving hundreds stranded offshore. Yet, driven in part by improved weather and the intensifying conflict in Libya, over 500 migrants left Libya last week attempting to reach Europe, the International Organization for Migration reports.

NGOs fear that lack of testing in the camps may be concealing an iceberg of disease, and that the crowded conditions make social distancing impossible. When the pandemic takes off death rates will soar. Doctors working in Moria, housing more than 22,000, but with a capacity for just 3,000, report that diseases like scabies, pneumonia and diarrhoea are rife. Water supplies and sewage provision are scant.

In a foretaste of what may come on the islands, the Greek government last week put two small camps on the mainland near Athens under quarantine, prompting EU commissioner for home affairs Ylva Johansson to demand the “immediate evacuation” of the most vulnerable “so that they can be secured in hotel rooms or apartments” and urgent medical equipment and staff.

The European Parliament’s justice and home affairs committee has called for the evacuation of all the refugees on the Greek islands as an urgent measure to avoid “many deaths”. And since its launch 10 days ago , more than 6,000 European doctors have signed an online appeal calling on EU governments to comply with the 2016 accord struck with Turkey under which each member state agreed to take in a share of asylum seekers.

That burden-sharing process has been deadlocked because of the refusal of a number of states to take any refugees, but must be reactivated in the face of the crisis.

It will not be easy. Last summer eight member states, including Ireland, agreed to resettle some 1,500 unaccompanied children from the camps. But little happened . Although Luxembourg took in 11 last week and Germany pledged to take in 50 of 350-500, Ireland was forced to cancel its contribution to the resettlement mission (eight minors) two weeks ago because of travel difficulties. Europe must not stand by.