Some 11,329 people have died from the virus in hospitals, including 717 deaths on Monday 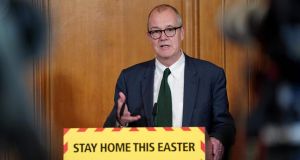 Britain’s daily death toll from coronavirus will continue to rise for a week and remain close to its current level into next month, the country’s chief scientific adviser has predicted.

Patrick Vallance told a press conference in Downing Street that Britain was following Italy’s path and that deaths would not start to decrease until two or three weeks after next week’s peak.

“I think this week we are going to see a further increase, thereafter we should see a plateau as the effects of social distancing come through. That plateau may last for some time and begin to decrease,” he said.

A total of 11,329 people have died from the virus in hospitals in Britain, including 717 new deaths reported on Monday. But chief medical officer Chris Whitty acknowledged that the full death toll is much higher and that almost one in seven nursing homes have reported outbreaks of coronavirus, with 92 homes reporting outbreaks in the last 24 hours alone.

“One of the things we want to do is to extend the amount of testing of people in care homes as the ability to test ramps up over the next few weeks. Because clearly care homes are one of the areas where there are large numbers of vulnerable people and that is an area of risk,” he said.

Britain’s Scientific Advisory Group for Emergencies (Sage) will this week review the impact of the social distancing measures introduced last month. But foreign secretary Dominic Raab, who is standing in for Boris Johnson while the prime minister recovers from coronavirus, said there was unlikely to be any immediate change to the terms of the lockdown.

“If we let up now, the virus will only take full advantage. It will spread faster and it will kill more people. If we refuse to give in to it, if we keep up this incredible team effort, we will beat this virus and we will come through this national test. Our plan is working,” he said.

Sir Patrick said the lockdown should remain in place, with schools and most workplaces closed until the epidemic had passed its peak and the rate of infection is in decline.

Jeremy Farrar, chairman of the Wellcome Trust and a member of Sage, said this week that Britain’s death toll could surpass Italy’s and Spain’s to become the worst in Europe. And Anthony Fauci, who is leading the fight against the coronavirus in the United States, said on Sunday that lives could have been saved if the lockdown had been imposed earlier.

But Sir Patrick said it was too soon to say how Britain’s experience with the virus compared with that of other countries where the death toll was lower.

1 Restaurants and gastropubs to reopen in December under Government plan
2 Helen McEntee holds up well for someone with barely a leg to stand on
3 In Brexit end game, Johnson scours menu of unpalatable choices
4 A bridge, a border and two Covid worlds
5 Coronavirus: 335 new cases and three further deaths
Real news has value SUBSCRIBE