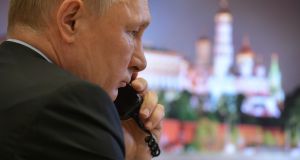 Vladimir Putin: he said the “sloppiness” of some had allowed coronavirus hotspots to appear in areas far from Moscow. Photograph: EPA

President Vladimir Putin has told Russia’s officials to prepare for the “decisive” phase of its battle with an accelerating coronavirus outbreak, and warned that they could face prosecution for criminal negligence if they fail to do their duty.

Russia announced 2,558 new cases of Covid-19 on Monday, a record one-day rise that brought the total number of people infected in the country to 18,328, of whom 149 have died.

However, officials have acknowledged that the data does not reflect the true scale of the outbreak, and Mr Putin gave his most stark assessment of the growing crisis in a video conference with members of government.

“The situation with coronavirus in Russia is changing daily, and not for the better . . . The coming weeks will be largely decisive,” he said.

“It is particularly important not to relax, because on the whole . . . as our specialists say, the peak of the epidemic has not passed. Even in Moscow it has not passed,” he added. Russia’s capital accounts for more than half of the country’s cases.

“It is vital to consider all the ways the situation could develop, including the most difficult and extraordinary, so as to flexibly and quickly correct the strategy and tactics of our actions,” Mr Putin told the officials.

He said the Russian military could be called upon to assist if necessary, and he ordered the government to draw up assessments of how the outbreak may progress in the coming days and weeks and “constantly update that forecast based on the real, developing situation, and report to me about it every day.”

Turning to regional leaders, Mr Putin said the “sloppiness” of some had allowed coronavirus hotspots to appear in areas far from Moscow, and he told them to prepare well during the breathing space afforded to most provinces by being “three to four weeks” behind Moscow on the infection curve.

“I want to draw attention to this again: if something is not done in time I will regard it as criminal negligence, with all the ensuing consequences, and not only of an administrative nature,” he added, hinting at potential criminal prosecutions.

Moscow plans to introduce digital permits for travel around the city this week so as to monitor its lockdown more closely, but the system suffered technical problems on Monday that officials blamed on hackers. Police checkpoints have been set up on roads into the capital, and most vehicles from other regions are reportedly being turned away.

A group of Chinese experts is now in Moscow to advise on how to fight the outbreak, while their homeland has closed its land borders with Russia to stop an influx of coronavirus carriers; Reuters reported that of 99 new Covid-19 sufferers registered in China on Saturday, 51 flew into Shanghai from Moscow and 21 had crossed from Russia into northern China.