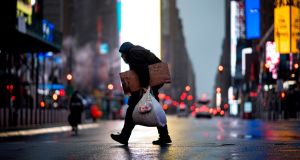 New York’s governor Andrew Cuomo has said that the “worst is over” in New York if current measures to combat coronavirus continue, as the number of hospitalisations in the state plateaued.

Speaking from the state capital of Albany, Mr Cuomo said that 671 people had died in New York on Easter Sunday, the lowest daily death toll in a week. He said that Easter Sunday, a holy day in the Christian tradition, made the latest deaths “especially tragic”.

“They are all in our thoughts and prayers.”

“Why New York? Why are we seeing this level of infection? It’s very simple. It’s about density. It’s about the number of people in a small location,” he said, adding that dense environments were “feeding grounds” for the virus.

Mr Cuomo said that reopening the state would be a gradual process, likening it to the opening of a valve.

“We will start to reopen the valve, turn it very slowly,” a move that will take place along with more testing and more precautions. “If you see that infection rate start ticking up....then you know you’ve opened the valve too fast.”

The governor said he would learn from other countries’ experience when deciding when and how to restart businesses and schools. “It’s a delicate balance. Remember none of this has been done before....I want to learn from those other countries frankly....what worked and what didn’t work.”

He was speaking ahead of a conference call with other governors in the northeastern area of the US, a region that has been badly hit by the virus that has now claimed more than 23,000 lives nationwide.

The group of governors established a regional advisory council to examine ways of reopening the regional economy once the coronavirus threat has passed.

“We cannot act on our own. We must be smart and tactical in how our region comes out of this or else we’ll be right back to square one,” said New Jersey’s governor Phil Murphy, whose state has recorded more than 2,000 deaths from the virus.

Mr Cuomo said that co-ordination with Connecticut and New Jersey in particular was necessary as a lot of New York’s workforce lives in the neighbouring states.

The new effort by the group of governors was announced amid signs of tension between President Donald Trump and the governors who are in charge of the states.

On Monday Mr Trump claimed in a tweet that some “fake news” media outlets say that it is “the Governors decision to open up the states, not that of the President of the United States & the Federal Government”.

“Let it be fully understood that this is incorrect,” he tweeted.

He also claimed to be working closely with the governors. However, most legal and constitutional experts say that ultimately individual states and their governors have the authority to reopen businesses and schools in each state, not the federal government.

Also on Monday the White House was forced to deny that Mr Trump was considering firing Dr Anthony Fauci, who has become the public face of the federal response to coronavirus along with White House coronavirus task force chief Deborah Birx.

Speculation about Mr Fauci’s future grew after Mr Trump retweeted a tweet from a former Republican election candidate late on Sunday which included the hashtag #firefauci. She referred to a CNN interview with Mr Fauci in which the health expert suggested that earlier intervention could have prevented deaths in the US.

“But what goes into those kinds of decisions is complicated. But you’re right. I mean, obviously, if we had, right from the very beginning, shut everything down it may have been a little bit different. But there was a lot of pushback about shutting things down back then.”